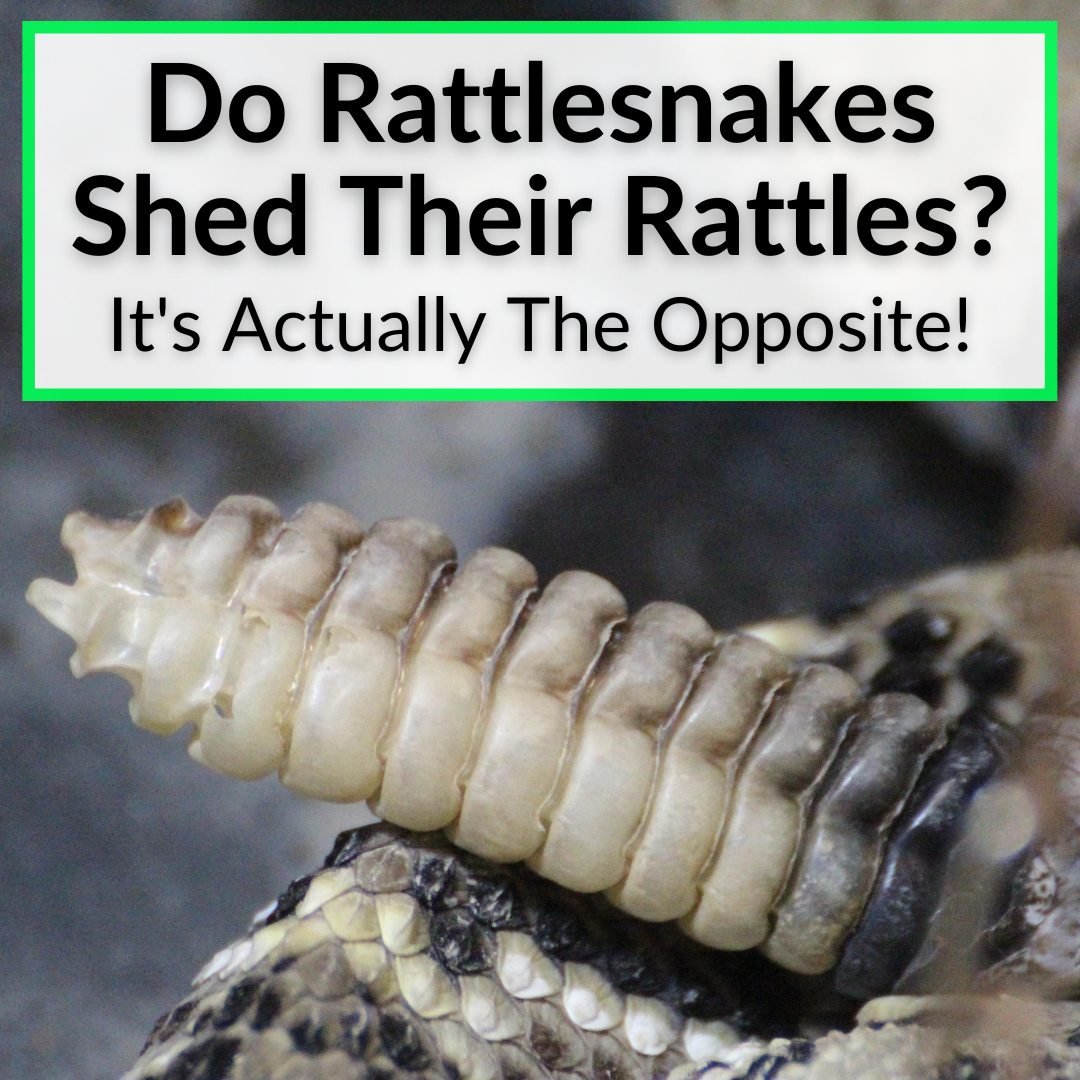 Rattlesnakes are a bit different from other species.

The biggest difference is obvious.

It’s right at the end of their tails and very visible.

If you get too close, it’s also very audible.

But what happens with that rattle, when the snake sheds its skin?

Does the rattle also have a layer of skin that sheds off?

It does not. In fact, what happens is quite the opposite of shedding.

Keep reading to learn exactly what happens to a rattlesnake’s rattle when it sheds its skin. It is one of the most fascinating facts about an already endlessly fascinating creature.

Do Rattlesnakes Shed Their Rattles?

No, rattlesnakes do not shed their rattles. They shed the rest of their skin just like any other snake, but the section covering the end of the rattle doesn’t fall off. In fact, quite the opposite happens.

Every time a rattlesnakes sheds its skin, it gains a section on its rattle. As a result, you can estimate a snake’s age by the number of rattle segments it has.

Rattlesnakes are fascinating creatures. They are similar to other snakes, but with a rattle on the end of their tails. The rattle makes a unique sound when they shake it, which they use as a warning to any approaching danger.

All rattlesnakes have a rattle on the end of their bodies (hence the name), but not all rattlesnakes’ rattles are the same. They can be quite different depending on the species of rattlesnakes.

All rattlesnake are also venomous, which makes them dangerous to small animals like rabbits and mice. But they are generally harmless to humans, unless we threaten them.

If that is the case, they may strike and bite. If they inject venom with their bite, it can be fatal, if not treated quickly.

Let us now take a closer look at the shedding process of rattlesnakes. As mentioned, it is a bit different from other species of snakes.

Rattlesnakes don’t shed their rattles, but apart from that, they undergo the same process of shedding or molting as other species. The unique aspect is that their rattles remain attached to their tails.

Rattlesnakes go through a regularly occurring process of molting, whereby there is a constant production of new cells as the skin is subject to damage. The cells being replaced are not produced independently, but develop in coherent cycles.

Once they produce enough new cells and the skin is functional, the old skin becomes a threat to their health. To prevent issues, they start removing it naturally.

One outward sign that this process is about to happen is when the snake’s eyes become milky blue. This indicates that a new layer of skin has formed and the old one is beginning to detach.

Each time a rattlesnake sheds, the shedded skin falls off at the rattle, revealing a new rattle segment. In this way, successive layers of the hard epidermis cluster to form the rattle.

A newborn snake thus has not rattle yet, but just the pre-button. It gains the first full segment after the first time it sheds, usually within a few days. But the rattle does not become audible until it gains its second segment, although it does not make much noise yet, with just the two segments.

Now we know that rattlesnakes do not shed their rattles. And we know that they get an additional segment each time they shed. That should mean that older snakes have extremely long rattles, yet you rarely see one with more than 10 or 12 segments.

Why is that? That’s because there are still a number of ways snakes can lose their rattles. In fact, it is very common for them to lose parts of their rattles. They will even break them off themselves at times!

How Rattlesnakes Can Lose Their Rattles

Rattlesnakes don’t shed their rattle, but they can still lose them. In fact, it is very common to lose some of the end segments. Here are some ways that these snakes will often lose portions of their rattles.

Since rattlesnakes aren’t on top of the food chain, they do have predators.They always prefer to run away, but sometimes they have no choice but to fight. It is very possible that they can lose all or part of, their rattles when fighting an attacker. Or when fighting particularly vicious prey.

If a rattlesnake loses its entire rattle, it does not grow back. If it only loses part of the rattle, it usually continues growing as before, adding a single segment with each shed.

The rough terrain in which rattlesnakes live can also injure their rattle. These snakes spend a lot of time slithering over rocks, branches and other terrain features. This can cause them to lose the end segments of their rattle.

Segments can come off simply from years of dragging over rocks and other hard surfaces, or the rattle can get stuck and sgements pulled off.

Sometimes rattlesnakes will even remove some segments of their rattles intentionally. Why do they do this? It is thought that there is an idea length for a rattle. When they get to long, they are more of a hindrance.

So the snake takes steps to keep its rattle in the ideal range. Most of the time, segments break off before the rattle ever has a chance to get too long. But if it does grow longer, the snake will likely take matters into its own hands. Figuratively speaking, of course, since it has no hands.

Some snakes can be born with deformities such as a missing rattle or part of a rattle. These deformities can occur in rattlesnakes and are not too problematic for them. Rattlesnakes can live without their rattles, although they do help scare off predators.

What Is A Rattlesnake Tail Made Of?

A rattlesnake’s tail is made of keratin, which is the same protein found in human nails and hair. Hardened scales are interlocked rings of keratin.

The muscles that control a rattlesnake’s rattle can move up to fifty times a second. This is why you can hear a buzzing rattling sound for long stretches of time.

Why A Rattlesnake’s Rattling Is Important

The rattlesnake’s rattle is important because it’s useful to warn potential threats of their position. In essence, it provides the snake with a means of communication. Whenever danger comes within their vicinity, they use their rattle to scare it away.

Can A Rattlesnake Tail Grow Back?

As mentioned above, if the snakes loses its entire rattle, it can not grow back. There needs to be at least one existing segment in order for the next shed to produce a new segment. But this means that the rattle does grow back if any number of segments are lost, providing the final segment remains.

How Old Is A Rattlesnake With 15 Rattles?

It is impossible to say for sure, since it depends on when exactly the snake was born and how many segments of the rattle it has lost over the course of its lifetime. That said, you can count the rattles of a rattlesnake to get an estimate of how old it is.

If you assume that a snake sheds two or three times per year, that means it should have two or three rattles for each year of its life. So a snake with roughly fifteen rattles could be around five years old. But again, there is no way of knowing how many rattle segments it has lost, or how many times it actually shed its skin each year.

Can I Save A Rattlesnake Rattle?

If you find a rattlesnake rattle, there are ways you can preserve it. The first thing you need to do is dry the rattle.

But before drying it, you need to ensure that there are no remains of the snake inside the rattle. If a little meat is attached to the rattle, remove it completely before letting it dry.

If you find a dead snake and want to remove the rattle to keep it, here are the steps you can follow to remove and preserve the rattle.

You need to remove the rattle from the rest of its body. Use a knife to cut through the end of the snake’s body, just above the rattle.

You need to keep the rattle in a dry location to preserve it effectively. Make sure there is no flesh left inside the rattle. Otherwise, it will take longer for the rattle to dry and the flesh will rot away. That is not pleasant.

Rattlesnakes Do Not Shed Their Rattles: Final Thoughts

Rattlesnakes shed their skin, just like any other snake. Until the skin reaches the rattle. Then things are a bit different. Instead of detaching as normal, the skin tears off at the rattle, leaving behind a new segment.

In this way, the snake’s rattle grows by a single segment every time it sheds. But it is very common for rattlesnakes to lose a segment (or a few) during the regular course of their life. If they do not, they are even known to remove it on purpose, in order to keep their rattle at an optimum length.