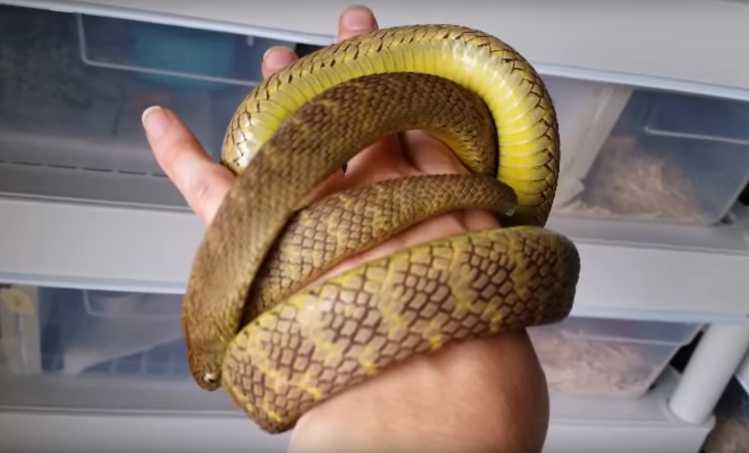 Egg Eating Snake Facts.  The Egg Eater Snake is a non-venomous snake that finds its home throughout the African continent.  The scientific name for the is the Dasypeltis and it is a very popular snake to have as a pet.  Most people find the easy to look after as long as you have a supplier of smaller eggs.  Once these snakes show bigger they can be fed chicken eggs but that rarely happens once they are held captive as a pet.

There is not a lot of information available on how to look after these snakes.  Therefore we have carefully put together a few facts on these beautiful creatures.

HOW TO SETUP THEIR ENCLOSURES

The first thing to do would be to layer the bottom of your enclosure with about a 5cm layer of Aspen.  The next thing you will need is your snake caves, almost any will do as long is it is big enough for the snake.  Get 2 caves so that you can put one cave on each end of the enclosure, similar to the below picture. – Egg Eating Snake Facts

The Egg Eater comes from dryer areas and the surrounding has loads of plant life like trees and shrubs.  That is because that is where birds have their nests.  Therefore it will be best to add a strong wooden branch and some leaves so that the snake feels comfortable. – Egg Eating Snake Facts

The last thing to add would be their food.  I prefer using Button Coil eggs for the smaller snakes and Quail Eggs for the larger Egg Eater Snakes.  The best way would be to scatter their food around the enclosure. – Egg Eating Snake Facts

ARE THE FEMALE SNAKES BIGGER?

The female snake is usually bigger than its male counterpart as with the Egg Eater Snakes. – Egg Eating Snake Facts

WHAT IS THE HARDEST PART OF CARING FOR THESE SNAKES?

By far the hardest thing would be getting these snakes to eat.  This is especially true for a snake that has just come to its new home.  This snake is highly sensitive to their surrounds that is why they stress themselves and show that by now eating.  The smaller snakes only want Finch Eggs so we have to syringe feed him on occasions.  Female snakes eat a lot easier in captivity than the male snakes. – Egg Eating Snake Facts

CAN YOU HOUSE THE FEMALE AND MALE SNAKES TOGETHER?

Unlike many other snakes, you can house the Egg Eaters together and they will not do any harm to each other. – Egg Eating Snake Facts

WHERE CAN I GET THEIR FOOD?

You can purchase fresh Quail Eggs directly from Amazon.  The tough eggs to find are the Button Coil eggs, you can find them from a local breeder.  You should make sure you have solid suppliers of this food before deciding to get Egg Eater Snakes. – Egg Eating Snake Facts

WHEN DO THEY EAT?

Like most snakes, these prefer to eat at night.  This is mainly because they can sneak around a birds nest easier in the night rather than the day time. – Egg Eating Snake Facts

HOW DO THEY EAT?

Egg Eater Snakes eat the egg whole.  They open their jaw and wrap it around the egg and swallow it.  The eggs goes out 2 inches down its throat where 3 big boney spikes crack the egg shell so they can consume the insides.  The snake will squeeze out every last drop of the egg until it is empty.  After they have done that they will crunch up the shell and spit the shell out.  It is also best to replace un eaten eggs after a few weeks as they could get off or rot. – Egg Eating Snake Facts

HOW OFTEN DO THEY EAT?

These snakes will eat every 4-7 days.  The best thing will be to leave eggs lying around in their enclosure.

HOW DO THEY KNOW WHERE THE EGG IS?

With a flick of their tongue, they can sense the egg and can smell exactly how old the embryo is within that egg.  They do not like eating an egg that has a small bird inside of it so will ignore those eggs and only eat the fresh ones. – Egg Eating Snake Facts

WHAT IS THE EGG EATER NATURAL DEFENSE?

The egg eater will rub their scales together to make a hissing sound to try scare off any predators.

DO THE EGG EATER SNAKES LIKE TO BE HANDLED?

There are loads of people who say that these snakes do not like being handled at all.  But I have found the more you handle them the less stressed and more relaxed they become. – Egg Eating Snake Facts

HOW BIG DO THE EGG EATER SNAKES GROW?

the egg eating snakes range in size from about 18 to 24 inches for adult males and about 3 to maybe 4 feet for the adult females.  The females need to be bigger as they need room to inside them to develop all their eggs. – Egg Eating Snake Facts

You will need to have 2 snake caves one in the cooler end and the other in the warmer end of the enclosure.  The warmer end should be kept at about 80-90 degrees and the other side at room temperature.  You can get your snakes one of these heating pads to keep the one side warmer. – Egg Eating Snake Facts

The egg eater snake can live from 4 years in captivity.  There are some records of these snakes living up to 12 years in the wild and possibly longer. – Egg Eating Snake Facts

ARE THE EGG EATER SNAKE VENOMOUS?

No, these snakes do not have any teeth and at the worst can only gum you.  They do not need any venom in the wild as they do not have to kill any rodent to eat it.

TREAT THEM WITH RESPECT

Snakes do not like to be kept in captivity and most of them will lose their appetites in the beginning.  The reason for this is because they are stressed out and they long to go back to the wild which is their home.  You can compare this to any human being having to go to jail or prison.  You will never be happy in prison and the same goes for these reptiles.  Therefore you need to respect them and treat them with the utmost care.

DO NOT POKE THEM TO GET A REACTION

Do not poke at them and try to get an angry response from them to impress your friends.  Remember to always have loads of food and water available and try your best to give them the utmost care.  Every now and then take them out into the fresh air so they can climb up a real tree.  If you cannot do all the above rather do not get one of these beautiful creatures, they do not deserve and did not ask to be treated in any bad way.

With all that said, if you know how to look after these snakes they can be your best friend. – Egg Eating Snake Facts

Read here about the Most Docile Snakes You Can Get.

How to Tame an Aggressive Ball Python112 Total Shares

Are There Snakes in Hawaii8 Total Shares
Toggle the Widgetbar