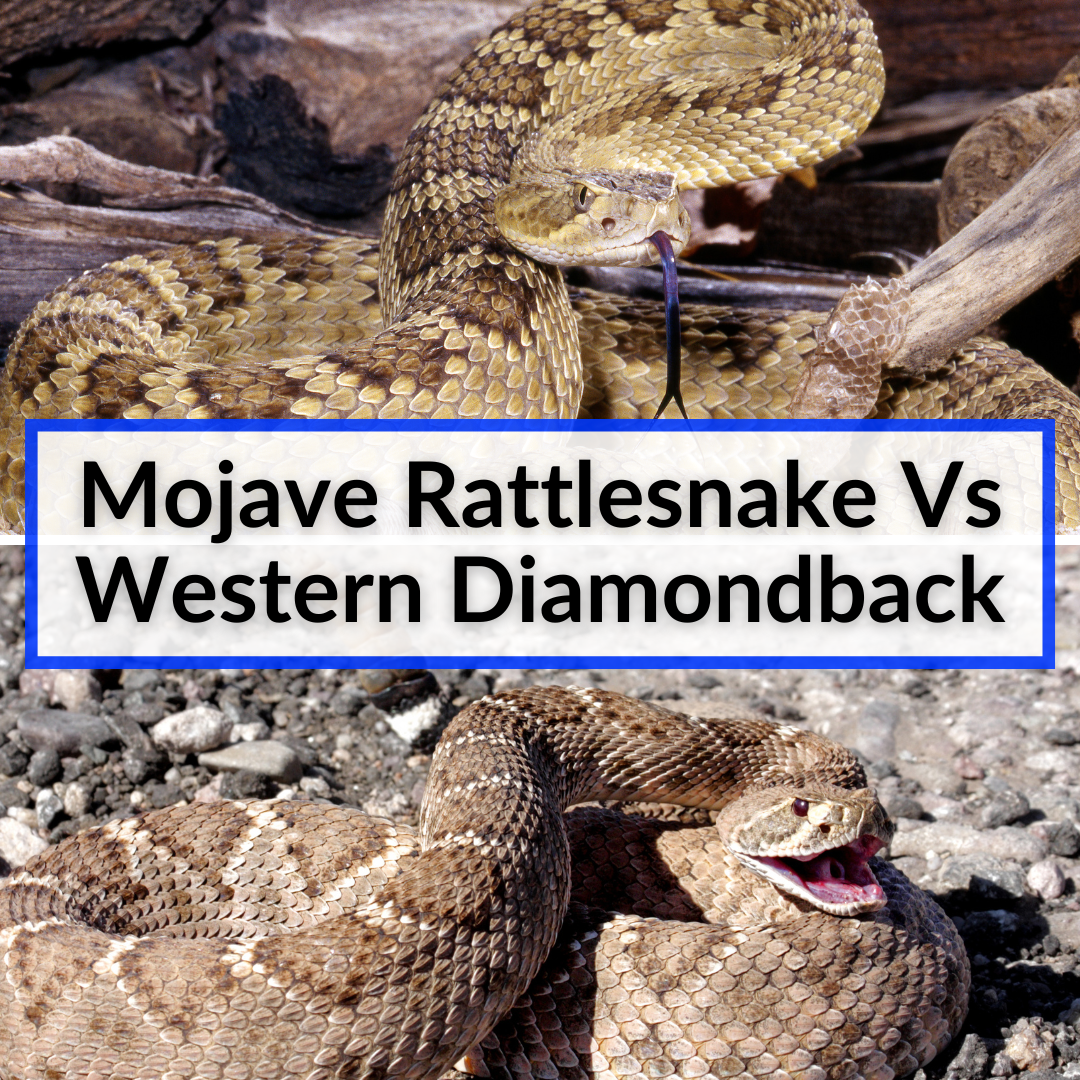 The reason for this comparison is obvious.

These are two incredibly similar snakes that are often mistaken for each other.

Is it possible to tell them apart?

It is. They do look slightly different.

And there are also a few other key differences between Mojave rattlesnakes and Western Diamondbacks.

Including one you hopefully never have to experience firsthand.

Keep reading for an in-depth comparison of the Mojave rattlesnake vs Western Diamondback rattlesnake. Starting today, you will always be able to tell these two species apart.

We’ll begin our comparison by taking a quick look at each snake individually, before diving into the differences between them, and then the similarities they share.

The Mojave rattlesnake is a highly venomous rattlesnake that is a part of the viper species. They can be found in the south western areas of the United States and through to the central parts of Mexico.

North American states in which the Mojave rattlesnake lives include, California, Nevada, the southern part of Utah, Arizona, New Mexico and Southern Texas.

You can identify a Mojave rattlesnake by its colorings. They are commonly a brown or a pale green color and are sometimes referred to as the Mojave green, due to this green color. They also have darker, diamond like markings across their bodies.

This particular rattlesnake loves the desert, or anywhere that’s dry, like among cacti or on grassy plains. They’re nocturnal animals and like to avoid the heat of the desert during the day by sleeping through it.

You’ll usually find them escaping the heat by taking up burrows made by other animals or by hiding under a large rock.

Mojave rattlesnakes have a bad reputation. And they have it for one main reason: they are the most venomous snake in the rattlesnake family and one of the most poisonous snake species in the entire United States. That is why we humans generally choose to avoid them completely.

Unfortunately, smaller animals aren’t so lucky. A Mojave rattlesnake’s diet consists of lizards, toads, birds, and rodents. They’ll strike their prey to kill it, injecting venom with the bite. Their venom attacks the nervous system, causing it to shut down and blood clots to form. Not the best way to go!

The western diamondback is another rattlesnake and thus also belongs to the viper family. Just like the Mojave, they’re home to the southwestern states of the US and the northern parts of Mexico.

You’ll notice that the western diamondback has either a tan or greyish color, with darker diamond spots on top of the base color. This is the reason for the name.

The diamond blotches start off as more of a hexagonal shape closer to the head, but as the shapes move further down their body, they become more distinguished as diamonds.

The western diamondback isn’t picky about its habitat. It will live in deserts, grassy plains, forests, rocky areas, and the coastline. You name it. As long as the area is warm, the rattlesnake is happy to make any habitat its home.

This rattlesnake’s diet consists of mice, rats, rabbits, birds, and lizards. The western diamondback will choose to either hunt during the night or early hours of the morning, when the day is at its coolest.

If they are not always successful, that is fine. They can go up to two years without eating any food. Now that’s a long time to wait for your next meal!

One particular difference in these snakes is their venom. The Mojave’s is much more venomous than the diamondback’s.

The Mojave’s venom acts quickly at shutting down its prey’s nervous system, which then leads to a very untimely death. The diamondback’s is less toxic and the snake needs to inject a larger amount into their prey to kill it.

Thought their venom may differ, I think it’s safe to say, I wouldn’t fancy being bitten by either of these snakes!

These two snakes are different in coloring and this is the easiest way to tell them apart. The Mojave is a brownish or pale green colour, while the western diamondback is more tannish or grey.

Both colorings allow the snakes to remain camouflaged in their warm and dry habitats. This comes in especially handy when they hunt their prey or hide from unwanted visitors, like predators or us humans.

The western diamondback isn’t too picky about where it calls home. You can find them in any habitat from deserts to forests or grass plains to the coast. As long as the area is warm, these diamondbacks will settle anywhere.

The Mojave is a little pickier. They prefer the drier areas of the desert or plains. Being nocturnal creatures, the Mojave is able to survive better in the desert, choosing to hunt at night and sleep under rocks or inside burrows during the day.

Now let’s take a look at the similarities between these two species of rattlesnake. They are quite similar overall, which is why the differences between them are more interesting and more important.

Similarities arise in their diet. Both types of snakes are carnivores, which means they have a meat based diet. This is true of every snake on earth, in fact. But both of these snakes choose to eat similar small animals, like lizards, birds, and rodents.

As part of the viper species, they first strike their prey and inject their venom into the animal. Once the venom has killed the animal, they swallow it whole. The animal then sits in the stomach where powerful stomach acid works on it for days, even weeks, until even the bones are digested.

With both snakes being a part of the rattlesnake family, they have rattles on the end of their tail. These rattles are used as a way to warn anyone the snake may see as a threat that they need to move away before the snake strikes.

The western diamondback even has the capability of rattling its tail up to sixty times a second. That’s so quick, we probably can’t even see it move!

The Mojave rattlesnake’s tail is black and white, while the diamondback’s is more of a beige colour. The tails are made of a protein called keratin, which is the same protein that makes up human hair and nails.

Every time the snake sheds it does not shed its rattle, but instead adds a new segment to it. In that way it is possible to estimate a snake’s adge by the number of rattlesnake segments, although it is not all that accurate. It is one of those facts about rattlesnakes you always see but that isn’t exactly true. Snakes lose segments from daily wear and tear.

These two snakes species have a lot in common. Both are rattlesnakes, both live in the same areas (for the most part) with both being among the most venomous snakes in California and other western states, and both have similar markings on their backs.

But they do differ in a few key areas. The most obvious is their different colorings. While they have similar markings, their bas colors are different. They also have different toxins in their venom, with the Moave’s being much more potent. Finally, the diamondback lives in a much larger variety of habitats.

One final thing both snakes have in common: you want to keep your distance! They will leave you alone, preferring to stay away from us humans, but if you get to close and the snakes feel threatened, they will strike. And trust me, you don’t want that!