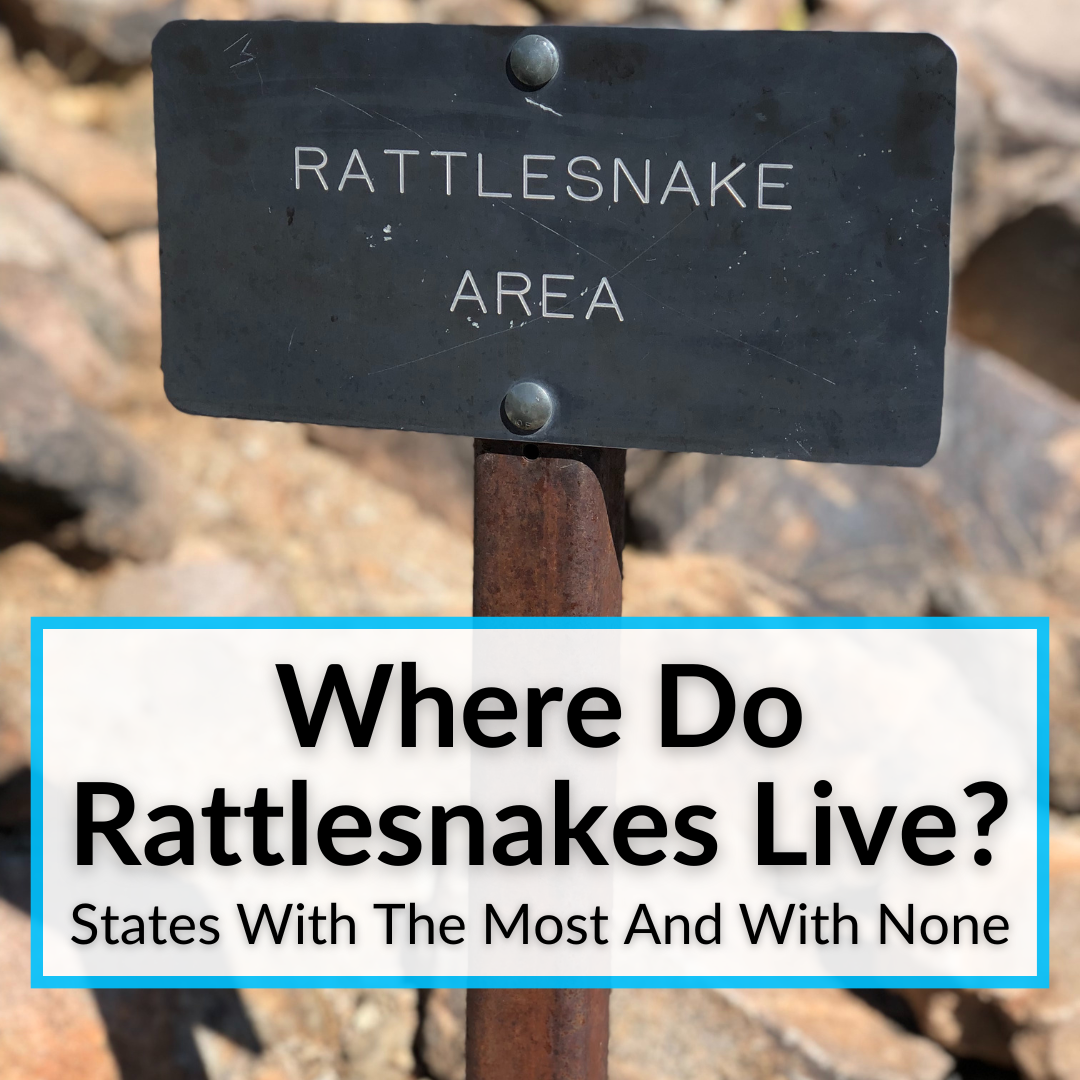 Rattlesnakes get a bad rap.

Many view them as killers. And there is some truth to that.

If you are a rodent.

But rattlesnakes have no interest in killing us humans.

Quite the opposite. They do their best to avoid us.

But if you startle a rattlesnake, it may feel it has no option but to strike. That is how people get bitten.

This danger is the reason most of us want to avoid these venomous snakes.

The first step to doing that is to know where rattlesnakes live.

Keep reading to learn everything you need to know. We will cover the type of terrain they like, where they like to hide, and which states are home to the most rattlers. We will also tell you which four states have no rattlesnakes.

Where Do Rattlesnakes Live?

Some rattlesnakes are even expert swimmers. The most common rattlesnake is the Timber Rattlesnake found in the eastern and southern United States.

Let’s take a closer look at the type of terrain rattlesnakes call home, before looking at which US states have the most rattlesnakes.

Rattlesnakes live in varied terrain, such as deserts, swamps, forests, and grasslands. Some species live along the coasts.

A small opening in a pile of rocks or a hole in a log makes a suitable den for rattlesnakes. In very warm areas, even a pile of leaves can keep rattlesnakes comfortable.

What matters most to a rattler is the ambient temperature. The ideal temperature range for rattlers is between 70° and 90° F (21° and 32° C).

They require a dry and arid environment to keep them warm and comfortable. Rattlesnakes living in cooler areas are more active during the day. In peak summer, they become nocturnal.

Where Are The Most Rattlesnakes In The US?

Now we will take a look at where the most rattlesnakes live in the United States. Is your state on this list?

Arizona has the greatest number of snakes of different species. Its amazing reptile diversity is comprised of over 50 snake species, out of which almost 21 species are venomous.

Arizona is home to nearly 13 species of rattlers. If you compare the total number of rattlesnake species across the world–which is 36 known species–then this state is home to slightly more than one-third of them.

Here is a list of the 13 species of rattlesnakes found in Arizona:

Texas wins in the category of ‘the state with the most snake species’ with nearly 68 species of snakes. Of these,10 are rattlesnakes. They are:

California has 50 snake species of which 9 are rattlers. Rattlesnakes are the only poisonous snakes in California. The species found in the state are:

This state has a total of 43 species of snakes, including 6 venomous species. There are 3 distinct rattlesnake species in Alabama including the Eastern Diamondback rattlesnake, Timber rattlesnake, and Pigmy rattlesnake.

Florida is home to 46 snake species of which only 3 are rattlesnakes. The Timber rattler is found throughout northern Florida and in limited parts of the panhandle. The other two species, Eastern Diamondback and Pigmy, are found throughout the state.

Where Do Rattlesnakes Bite People The Most?

An estimated 7000 to 8000 people are bitten annually by venomous snakes in the United States, with North Carolina having the highest bite rates. Thankfully, only 10 to 15 deaths per year are attributed to the country’s snake bites.

Rattlesnake bites are most common in California. The CPCS (California Poison Control Society) reports registering nearly 300 bites a year from rattlesnakes, with additional bites being treated by physicians and hospitals.

Rattlesnakes usually bite their victims on the hands, feet, and ankles. Remember: rattlers are shy and do not go seeking trouble actively. They also prefer hiding over attacking.

Furthermore, most rattlesnake bites occur in people’s own yards, when they unknowingly disturb a hiding snake under a pile of wood or some debris.

This means that you can prevent rattlesnake bites simply by moving back a few steps when you see one.

If you live in any of the states that have large rattlesnake populations, then it is best to protect your legs with long pants, knee-high boots, or snake gaiters when you go hiking in the bush.

And don’t forget to keep your yard neatly mowed and the basement and shed clean and free from trash. If you still happen to spot a rattlesnake in your yard, do not attempt to catch it yourself. Please call the animal control helpline right away.

Where In The US Are There No Rattlesnakes?

There are four US states that do not have any rattlesnakes. These states are:

Where Are Rattlesnakes Found: Final Thoughts

Rattlesnakes inhabit almost every single US state. All but four, in fact. They live in most types of terrain, which means you can encounter on in the majority of the country.

That said, rattlers do not want us to encounter them. They do their best to stay away from us. But if you yard is inviting to them, a rattler could set up shop there. That increases the risk that you might startle it and it might strike at you as a result. This is exactly how the majority of bites happen.

To avoid this, you first need to know what types of rattlers live in your area. If there are species where you live, keep your yard neat and tidy. Snakes are attracted by places t hid and by rodent populations. If your yard offers neither, they will find elsewhere to hang out.