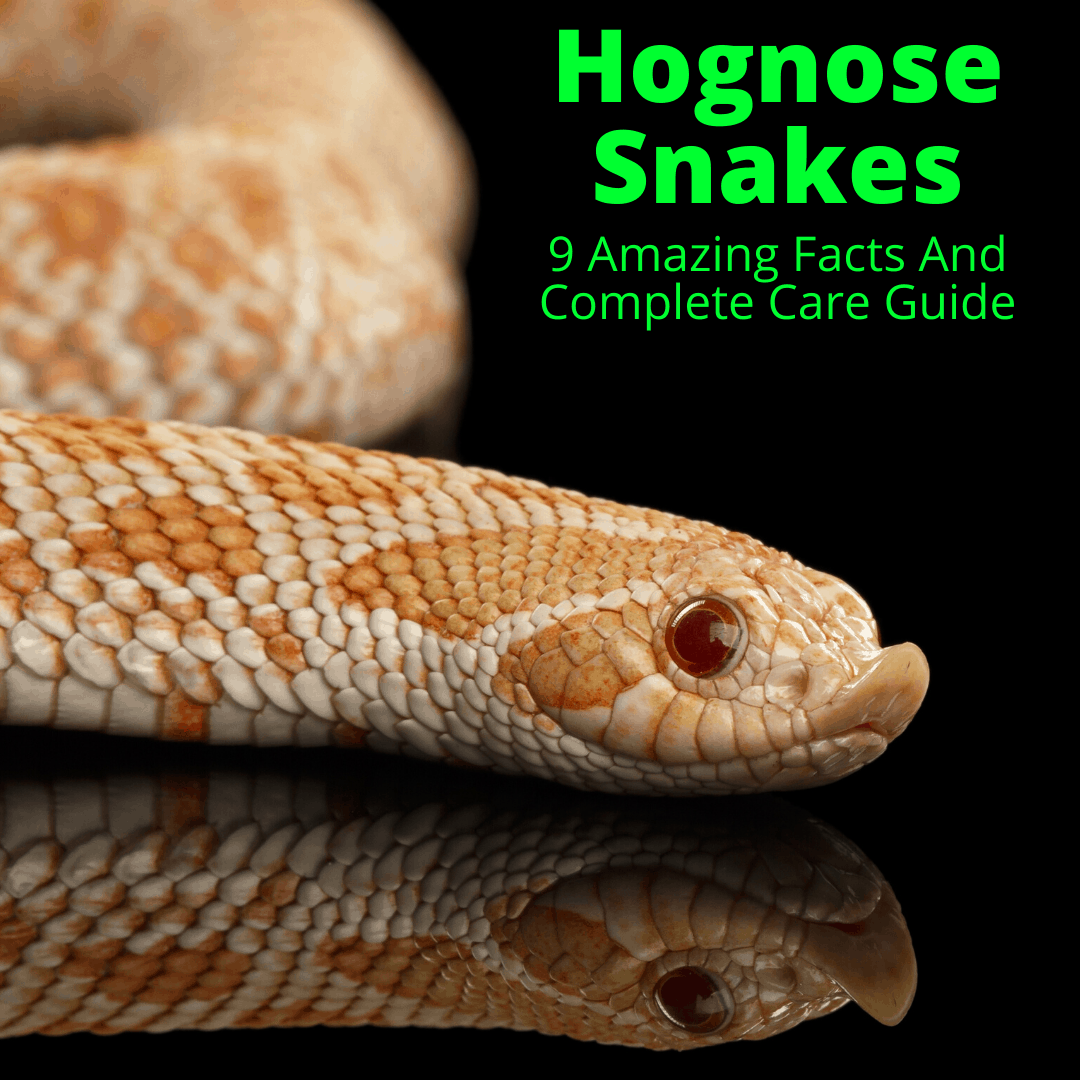 That’s the reaction a lot of people have when they first see a hognose snake with it’s little upturned snout.

Others run away screaming, because, well, it’s a snake.

Since you find yourself here reading this, I’m guessing you’re either in the first camp, or you’re curious about the snake but won’t go so far as to call it cute.

However you feel about its looks, there is no denying the hognose snake is fascinating. It also makes for a great pet.

Let’s start out with some facts about the hognose snake, before diving into our complete care guide that will teach you everything you need to know to successfully keep this serpent as a pet.

Those 9 facts were great, but there is so much more to the hognose snake. Let’s take a closer look at this wonderfully unique creature. 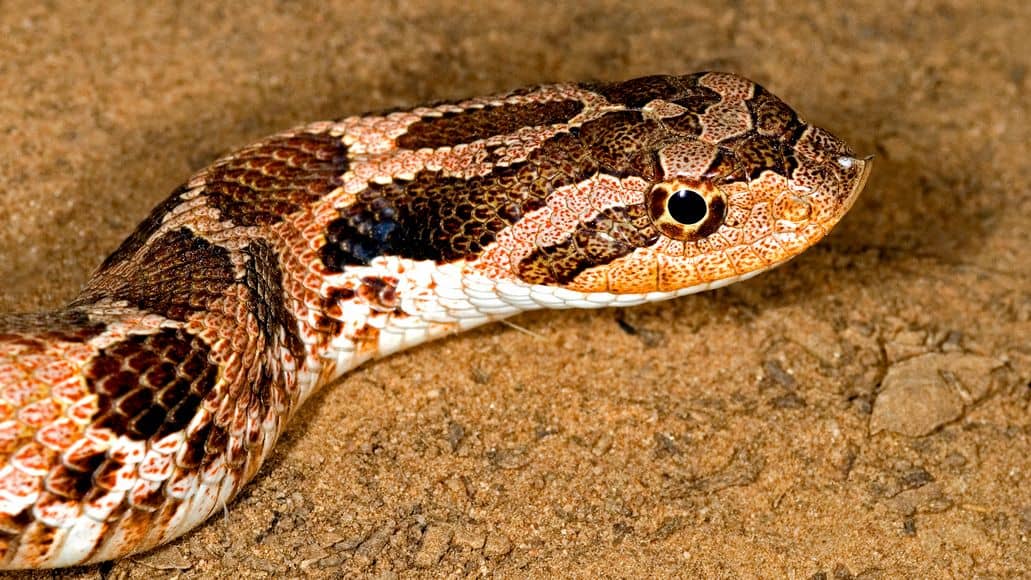 With their (dare we say cute) upturned snouts, many color variations, and their small size, hognose snakes make a perfect pet snake. This guide will tell you all you need to know about keeping and breeding hognose snakes

Hognose snakes are actually not just a single snake species, but the common name used to refer to several colubrid snake species, all of which have the characteristic upturned snouts.

The natural habitat of these species covers parts of the United States and Mexico, with the eastern hognose snake also being found in some southern parts of Canada. Others are found in Madagascar and South America. The ones most popularly kept as pets originate from the US.

Genus And Species Of Hognose Snakes

The three genera of hognose snakes contain some 14 different species. They are:

Hognoses are some of the easier snakes to take care of as they do not need many specialized types of equipment to ensure their health and safety.

Hognose snakes are quite docile and will seldom bite even though they may put up a very dramatic display when they feel threatened. Once your snake is used to you and knows your smell, though, it will no longer feel that you are a threat.

Hognose snakes are fed mice in captivity (unlike the frogs and toads that they eat in the wild). The prey should be dead. Rodents can do a lot of damage to your snake if they are fed to it alive. There have been reports of snakes having to be put down because of wounds inflicted after they were fed live prey.

Some snakes don’t take well to being fed mice. In that case, you can change the smell of the mouse to fool the snake into thinking it is an amphibian. There are two main ways of doing this — either defrost the mouse along with a frog leg or dip it in amphibian urine. Some owners also have luck dipping the mouse into cod liver oil or defrosting it with a fish.

Braining can also be tried if the above methods do not work. Braining involves making an incision into the head of the prey and exposing the brain to entice the snake.

When hognose snakes first hatch, they are only 5 to 9 inches long and must be fed pinkies as their first meals. The size of the mice can be adjusted as your snake grows to maturity.

You don’t need a very large snake enclosure for a hognose snake. A medium-sized enclosure (30 to 40 gallons) should be large enough. There should be one square foot of floor room per foot that the snake is long. It can be about a third of the snake’s length in height.

However, you should not start off your newborn or young hognose snake in this large an enclosure. They can get stressed by the amount of space and stop feeding. It is best to keep snakes of this age in a faunarium that is the appropriate size.

For the substrate or bedding, you can use aspen shavings (replace all the shavings once a month and remove any of the bedding that has urine or feces on it as soon as possible with a cat litter scoop). Eco earth and orchid bark can also be used as a substrate. If you do use orchid bark, be sure to keep an eye on the humidity inside the enclosure.

Beech chips can be used if the other substrates are not available. However, never use cedar, pine or redwood shavings. These are toxic to most reptiles.

Ideally, the temperature inside your hognose snake’s enclosure should be room temperature on one end and approximately 82 to 85° F (30 to 33° C) as you near the heat source. This will help them regulate their body temperature. Use a heat mat with a thermostat or a bulb with a dimming feature.

If you use a heat mat, it should not cover more than a third of the base of the snake enclosure. It also has to be regulated by a thermostat to keep it from overheating. I recommend this heat mat from iPower for a hognose snake tank.

You also need to provide your hognose snake with a hide or two in their enclosure. If they don’t have a hide, they will become stressed. The hide should be just big enough for your snake to curl up into.

Don’t buy a large hide thinking it will give them ‘stretching room’ — they will not appreciate the extra space and will instead feel unsafe. Here is an example of a good hide on amazon.

Because hognose snakes are also inquisitive, it’s a good idea to change up the layout of the enclosure every now and then to keep them from getting bored.

Hognose snakes can suffer from most of the same illnesses as other pet snakes. Read our article Signs of a Sick Snake to learn more about snake illnesses.

You will definitely need to keep an eye out for mites. They present as small black dots around your snake’s mouth and eyes. Respiratory infections are also not uncommon and can be a very serious sickness in snakes. If you detect the symptoms take your snake to see a vet immediately. 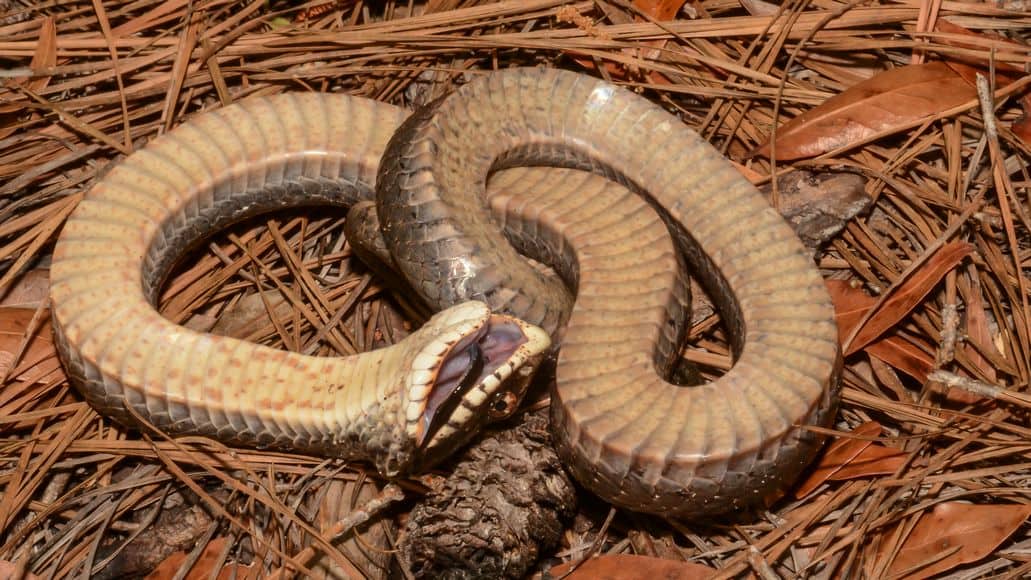 One of these snakes’ defensive tactics is to play dead. But it is not their first line of defense Here are the different things they will do before playing dead.

1. They will hiss at you and open their necks

The Hognose Snake is known for the hissing sound it makes when threatened. This is their first line of defense. The first thing they will do is expand the ribs in their neck like a Corba.  And then they will hiss as loud as they can. They do to try and chase away a potential predator.

2.  They will fake strike you

The snake will hiss at you and then it will strike at you. It will strike but not bite. It’s almost like it tries to knock you with its head.

If nothing else works, they resort to this interesting defense tactic. They turn themselves upside down and open their mouth like they are dying.

When they pretend to be dead they also let off a musky smell. They have a gland near their cloaca and they will excrete musk from that gland. The smell is pretty awful and you could easily think the snake is dead.

There is still some debate among herpetologists as to whether to classify hognose snakes as venomous or not. Their poison is certainly lethal to their prey, but it’s not poisonous to humans.

And while they will often act as if they are going to strike, they rarely bite. The chance that you will come into contact with their poison at all is very small.

Even if these snakes do bite, which they won’t, their fangs are at the back of their mouth which makes it very difficult to deliver the poison.  The snakes also do not have true venom, but more of a poisonous saliva which runs down their teeth to be munched into their prey.

The reason why their fangs are at the back of their mouth is so they can bite it into their prey. Unlike other snakes that have venom this snake has a saliva gland called the Duvernoy’s Gland.

The toxic saliva is stored in this gland, ready to be chewed into its prey. The saliva will paralyze the frog or mouse and will make them easier to swallow.

See this video for more information about this:

Hognose snakes should be at least 2 years old and 16 inches in length before you try to breed them. Breeding can be divided into the following parts: brumation (cooling your snakes down for winter), mating, laying the eggs, incubation of the eggs, and hatching.

Brumation increases the chances of successful breeding and should be done with both your male and female snakes. For brumation, lower the temperature gradually to approximately 58° F (14° C) and maintain this temperature for about six to eight weeks. Although the snakes won’t eat during this time, you must ensure that they always have fresh water available.

Mating season in the wild for hognose snakes is June to August. These months are also a good time to introduce your female hognose to the male’s enclosure.

As long as you feed them well, they can be left together for a few weeks. If they are not properly fed, they may resort to cannibalism. If their mating was successful, the female will become pregnant — which is also referred to as “gravid”.

Once pregnant, your female hognose snake will need to be fed more often. This is to ensure that she gets enough nutrients to develop her eggs.

A nest box must be placed in the snake enclosure when your female is ready to lay her eggs. You will know it is time because it will be obvious that she is looking for a place to lay them.

When she has laid all her eggs (between 4 and 23), they should be removed from the snake enclosure. Feed your snake after she has laid the eggs and keep on feeding her more often. This will increase the chances of a successful “double clutch”.

Important! If you see that your snake is struggling and that one of the eggs is stuck, get her to the vet immediately, as this can be life-threatening.

The eggs must be incubated between 53 and 65 days (i.e. six to eight weeks). The eggs should be kept at a constant temperature of 79 to 81° F (25 to 27° C). Use vermiculite inside the incubator to keep the humidity levels correct.

Hatching And The Hatchlings

After the six to eight have passed, the hatchings will break out of their eggs using their egg tooth. Do not force the hatchlings to come out of the eggs, but leave them to consume the yolk for another few days. They will leave the eggshells as soon as they are ready.

It is important to house all the hatchlings separately from this stage onward. Keep them in appropriately-sized containers to ensure that they don’t undergo unnecessary stress.

First Feed Of The Hatchlings

You should feed your hatchlings a pinky a week after their first shed. If you see that they do not want to eat it, try one of the methods we listed above under “diet” to make it more enticing to the little one.

“Toad scenting” or “braining” the pinkies should do the job. The hatchlings should be fed every 5 to 6 days. Make sure that your hatchlings eat mice without a problem before you sell them, though.

Whether you find the little upturned nose cute or not, you have to at least admit the hognose snake is pretty cool. If you’ve read this far, you’re likely considering it as a pet or have already gotten one and were looking for some help in caring for it. Either way, I hope you found what you were looking for and you have a great time with the newest member of your family!

Anaconda As A Pet: Complete Guide To Keeping An Anaconda105 Total Shares