There is one thing I always want to clear up.

Snakes are venomous, not poisonous.

But we titled this article ‘most poisonous snakes in the US’, because that is what most people search for.

This way more searchers see this article and hopefully learn to search for ‘most venomous snakes in the US’ next time.

So what is the most venomous snake? It actually depends.

The snake with the most potent venom is not the most deadly or the most dangerous.

Do you want to know which snake kills the most people, or which one has the most potent and deadly venom?

Either way, we will give you both species below, along with 6 other highly venomous snakes.

Most Poisonous Snake In The US (The Top 8)

The coral snake is the most venomous snake in the US, in that it has the most potent venom. But it is not the deadliest snake. That honor goes to the Eastern Diamondback Rattlesnake.

Let’s take a look at the 8 most venomous snakes in the United States. Some are on this list because of their potent venom, even though they rarely kill anyone.

The Eastern Diamondback rattler is the heaviest and largest species of rattlesnake and also the deadliest snake in North America. It accounts for the most fatal snake bites in the country.

The Eastern Diamondback rattlesnake has a distinct rattle at the base of its tail. It is made of loose segments. The snake makes a loud buzzing or rattling noise upon vibrating the tail.

The maximum recorded length of an Eastern Diamondback is 8.5 feet (2.5 meters). Colors seen in this species are olive green, dusty gray, or blackish brown. These snakes have light stripes on the head extending back from the eyes.

The Eastern Diamondback’s venom has a 30% fatality rate. The venom is a hemotoxin that causes the death of red blood cells. Thankfully, antivenom is readily available throughout the range of the snake. As a result, fatality rates are low.

Also known as the pelagic snake, the Yellow-bellied Sea Snake does not result in too many human bites, because it primarily lives in the ocean. However, its venom is among the most deadly. And since antivenom is not easily available, untreated humans can easily die, making it a potentially dangerous snake.

The snake has a yellow underbelly and a dark brown back. Its tail is flattened from side to side and has an oar shape. The snake uses this to navigate in the water. This species also have small belly scales which make them virtually helpless on land.

Yellow-bellied sea snakes have a large lung capacity that enables them to stay submerged underwater for several hours. In North America, they are found along the Pacific Coast.

The snake’s potent venom contains of neurotoxins and isotoxins. Although each bite only yields between 1 to 4 mg of venom, the combination of neurotoxins and isotoxins makes it deadly to humans and animals, mainly fish. In humans, bites from yellow-bellied sea snakes could result in paralysis and serious kidney damage, and can potentially be fatal.

This is the most common venomous snake in the eastern and central parts of the United States. It is also called the North American Copperhead.

Young copperheads have a greenish or yellowish tail. Most species are 20 to 30 inches long.

These snakes are mostly found in Texas, Oklahoma, Alabama,and other southeastern states. Copperheads prefer a variety of habitats such as semi-aquatic, terrestrial, rocky, and more.

Although each bite can contain an average of 100 mg of venom, copperheads sometimes inflict dry (or venom-less) bites as a warning. But these bites are still extremely painful and often described by victims as “worse than the pain of childbirth”. Copperhead bites are rarely fatal but could easily kill small animals and children without timely treatment.

Cottonmouths are covered in brown, black, or yellow scales with dark borders. They also have bands that go around the snake’s body and fade with age.

They have flat, triangular heads. Like all pit viper species, they have loreal pits near their eyes. The insides of their mouths are white and look like cotton, which is how the snake gets its name.

Cottonmouths live around bodies of water, like lakes, streams, bogs, etc. They are mostly found around the southeastern parts of the United States.

A cottonmouth’s deadly venom can kill people. It can make victims bleed for hours after being bitten. It may also cause respiratory difficulties.

That said, their bites are rarely fatal these days. In 2017, 255 people were bitten by cottonmouths. Of these, only 10 had serious symptoms while 244 had moderate symptoms. None of them died.

The Tiger Rattlesnake is a highly venomous pit viper that can be deadly to animals and humans.

Tiger Rattlesnakes are easily recognizable due to their spade-shaped heads. They also have a large rattle. The colors in this species include gray, lavender, blue, and pink, with cross patterns. Tiger rattlesnakes measure around 2 to 2.5 feet in length.

In the USA, tiger rattlers may be found in canyons, foothills of mountains, deciduous forests, and grasslands.

This relatively small rattlesnake has equally small venom glands which inject very little venom. However, it is still extremely deadly, because of its higher neurotoxin content on a drop-for-drop basis. Despite its low venom yield, this species has the potential to be extremely deadly to humans and animals.

The Timber or Canebrake Rattlesnake appears calm and placid but, if given the opportunity, it can explode into a full strike.

An average adult timber rattler is 4 feet long. This species of rattlers shows a great deal of variation in patterns and colors. You might see them in black, yellow, gray, or greenish-white. They also have a rust-colored stripe along their back.

In the USA, timber rattlesnakes are found in southeastern states. They prefer rocky outcrops.

Timber rattlesnakes have a level of 37% neurotoxicity. The treatment window is just 2 to 3 hours and more than 3 cases of bites by this species have ended in death within an hour. 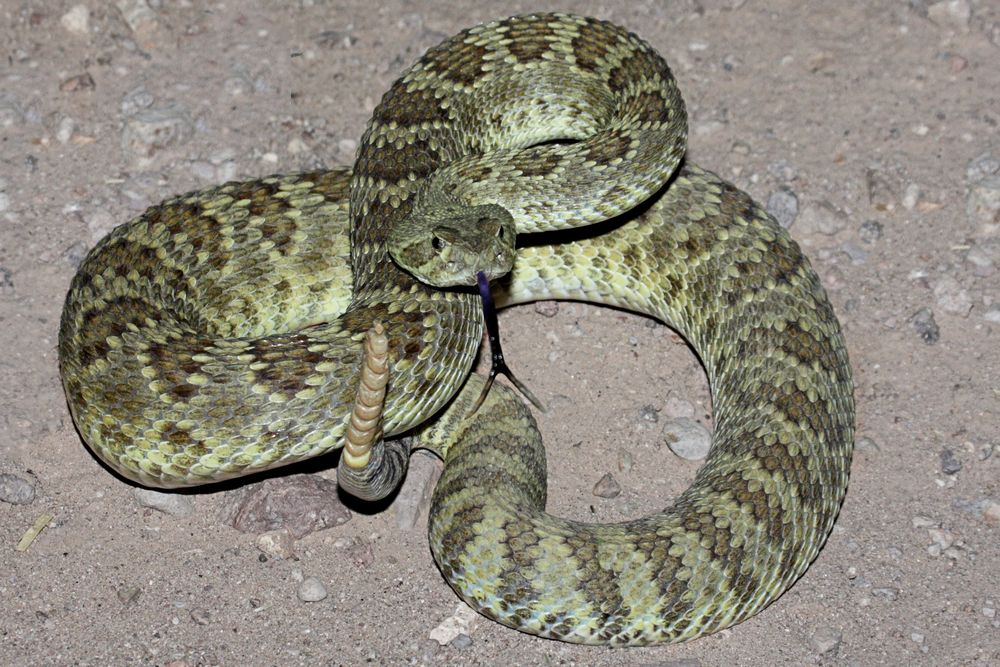 The Mojave Rattlesnake is a species of western rattlesnake believed to deliver the most dangerous bite of all North American rattlesnakes. It is also called Mojave Green.

The average size of the Mojave green is around 3.5 feet. Their light-green, brown coloring allows them to easily blend in with their surroundings. They have white color bands around their rattle tail.

In the USA, they are found predominantly in the deserts in the southwest region.

Adult eastern coral snakes measure around 2.5 feet in length. They are colorful, beautiful snakes with rings of red, black, and yellow wrapping the entire body except for the head which is all black.

This species of venomous snake does not have a triangular head. Eastern coral snakes have a pair of short, fixed front fangs.

Eastern Corals are mainly found in the southeastern parts of the USA, along the coastal plains of North Carolina, in parts of Florida, southern Georgia, Texas, Alabama, Mississippi, and Louisiana.

Eastern Coral Snakes inject a deadly neurotoxin through their venom. This neurotoxin blocks acetylcholine, an important neurotransmitter that enables muscles to function. Bite victims often suffer from muscle weakness or paralysis. Other symptoms of eastern coral snake envenomation are breathing difficulties and vomiting.

What Is The Most Venomous Snake In The United States: Final Thoughts

The yellow-bellied water snake has incredibly potent venom, but lucky for us, bites are extremely rare. For that reason, it has actually never killed a single person in the US.