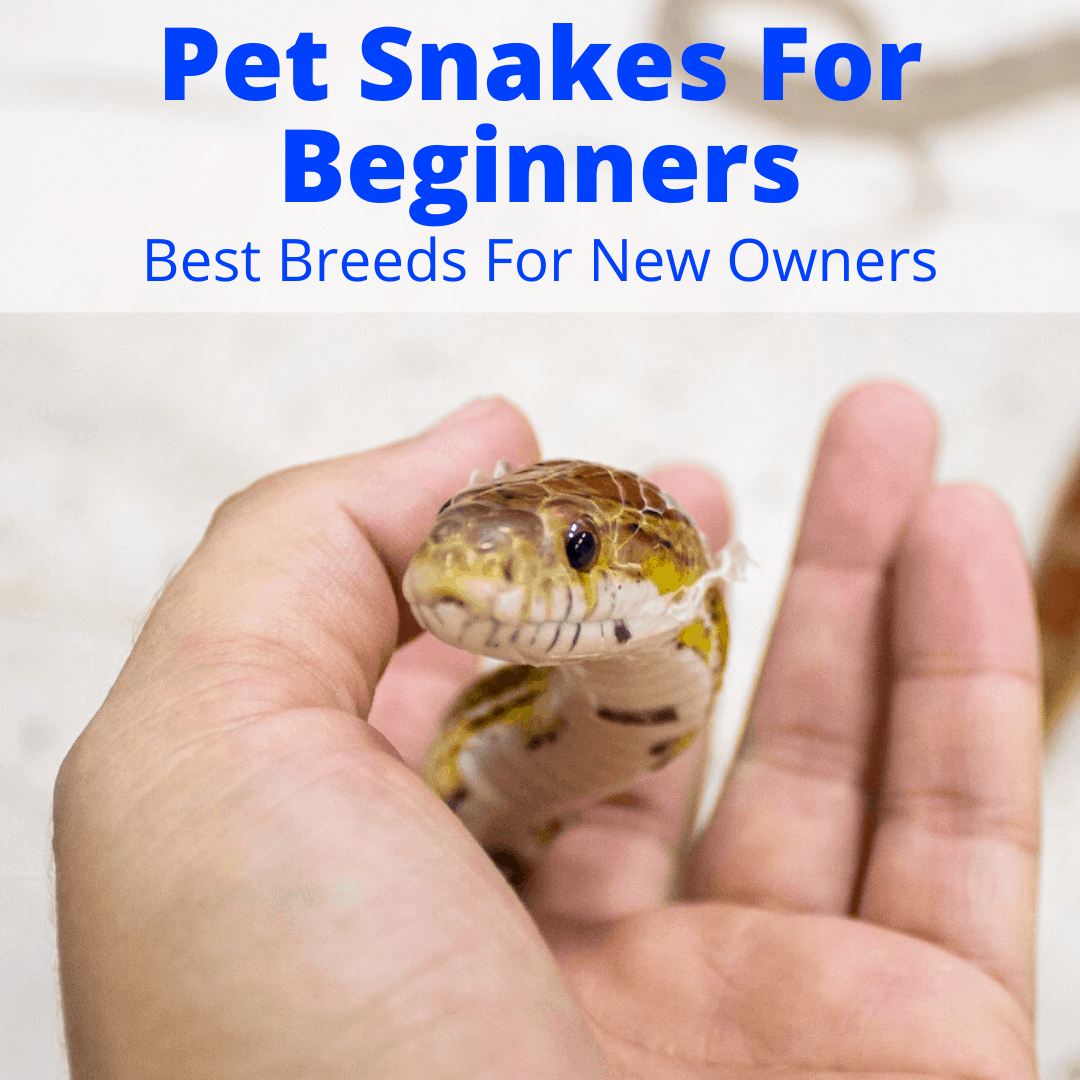 Snakes are all the rage!

Well, maybe that’s an exaggeration. But they are becoming much more popular as pets these days.

And like with most other pets, there are a lot of different breeds to consider. Some breeds are much more trouble to keep as pets than others.

As a beginning snake owner, you want a species that does not grow too large or need too much special care. The costs, both in terms of time and money, quickly add up with some breeds of snake.

That’s why new owners should stick to one of the pet snakes for beginners listed below. All are relatively easy to care for, but just as rewarding to keep.

I know it might be tempting to get a large snake, like a rock python, reticulated python, Burmese python, anaconda, etc. But as a beginner, we strongly recommend you avoid larger breeds. Instead stick to one of the tried and true beginner snakes.

The following breeds all make great pets for beginning snake owners, because they are smaller and much easier to care for. 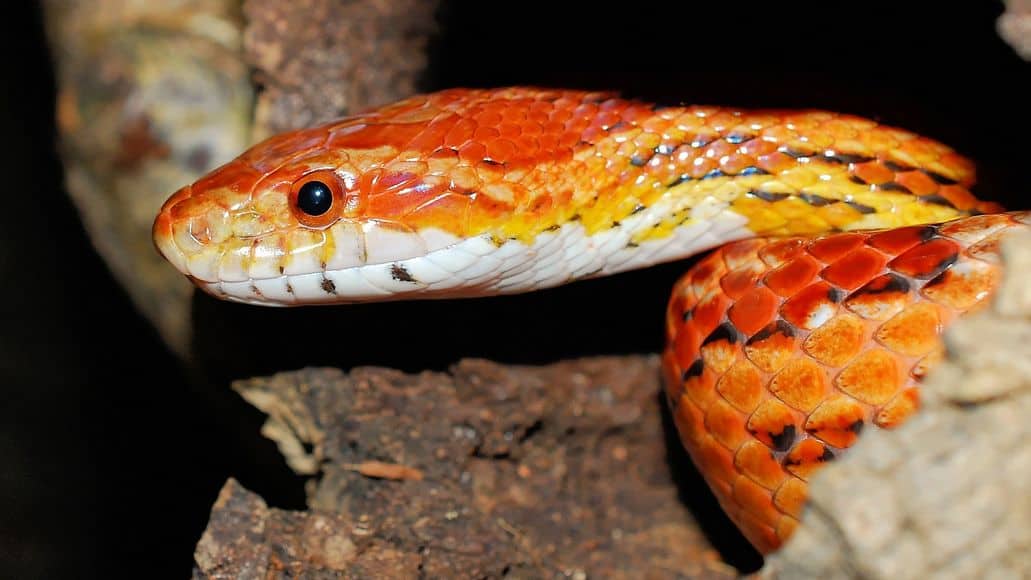 Corn snakes (Pantherophis guttata) are probably the most well-known and popular of these 5 breeds of snakes. Native to North America, there is very little not to like about corn snakes.

They don’t grow too big, so you can keep them in fairly small snake enclosures and they also have gorgeous color combinations and quite a docile disposition. While they will try to defend themselves when handled, a cat can do more damage than a corn snake! They are basically harmless.

Be sure to let your new snake settle for a few weeks and get it used to its routine before handling it too much. They usually tame quite quickly when they get used to you.

As corn snakes hatch at 8 to 12 inches long grow to about 4 – 5.5 feet in length, they are still small enough when mature to be handled with relative ease. They also have a lifespan of around 20 years and are reproductive until the age of 10 or 12. They are not venomous. 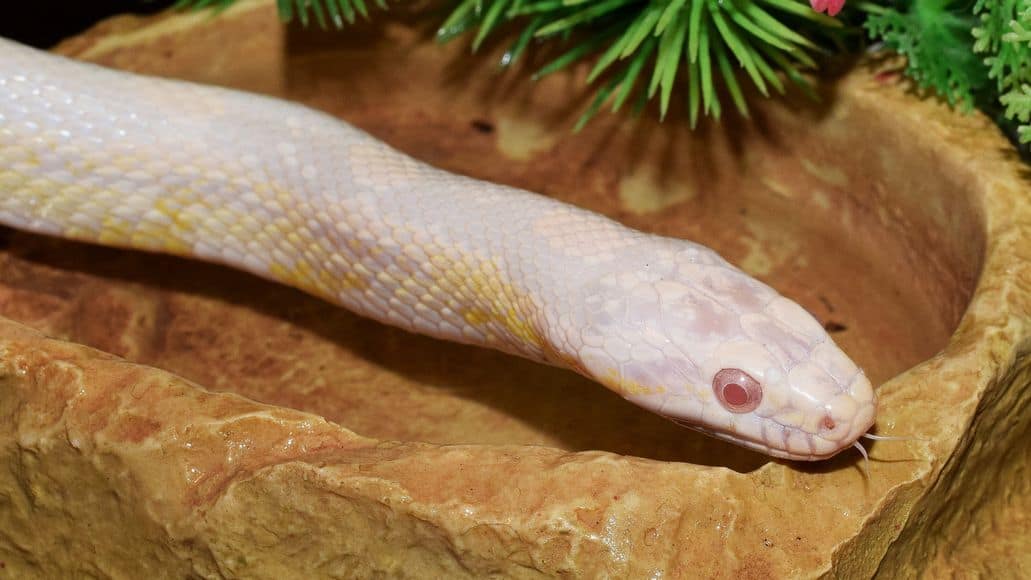 Housing corn snakes is much easier than most other types. The babies can easily live in plastic vivariums the size of a large shoe box for the first few months. Adult corn snakes need an enclosure of at least 20 gallons, although bigger is better. We recommend 40 gallons or more.

It is very important to only house one corn snake (or any snake) to a snake enclosure, as they are not social animals and having another snake in the same enclosure causes them stress. Remember that the enclosure must be escape-proof, because snakes are quite the escape artists!

No special lighting or heating is required for corn snakes, but natural light will help it adjust its day and night cycles — but do avoid direct sunlight, because direct sunlight could raise their body temperature too much and actually kill them. Give them some nice accessories to keep them entertained. Climbing toys are always great.

They do not recognize crickets as food, however. Don’t bother trying to offer your snake any. Most corn snakes will learn to eat previously frozen (but completely thawed) mice. Adults only need to be fed every 7 to 10 days. 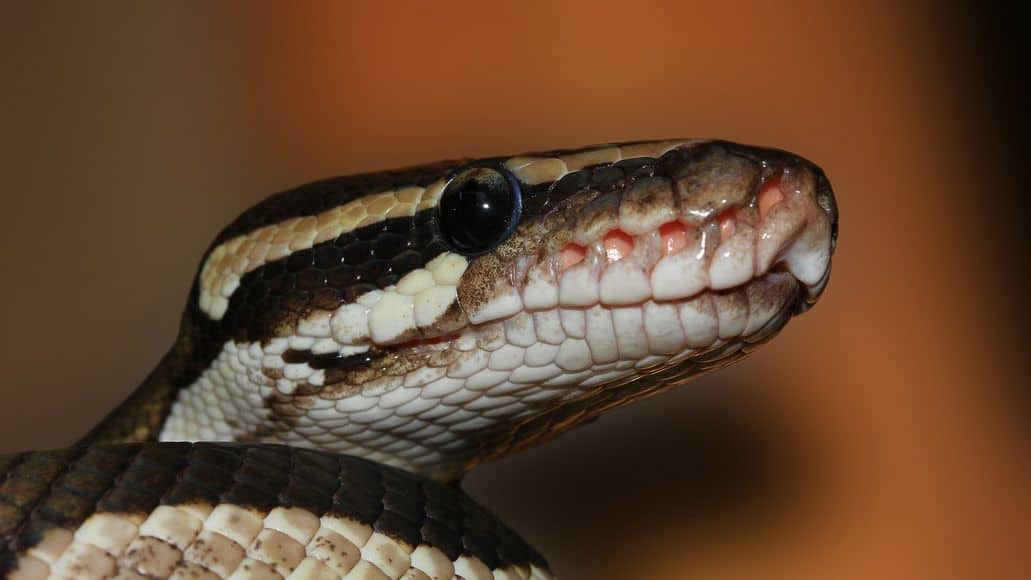 The Ball Python (Python regius) is also a very popular choice for a pet snake thanks to its many morphs and shy demeanor. Native to Central and West Africa, the ball python does need some humidity in its enclosure.

Though not large (males grow to about 2 to 3 feet in length and females 3 to 5 feet in length), the ball python is heavy bodied. These snakes live a long time, with some surviving for more than 30 years in captivity. Make sure to take that into account when deciding whether to get one.

Snake enclosures for ball pythons need to be around 3 feet in length and a 30-gallon enclosure works well, though we always recommend going larger. To keep the humidity up inside the enclosure, it’s important not to use a screen top for ball pythons. The water bowl should also be large enough for the snake to soak in.

The ball python is among the top five snakes that are perfect for beginners, because it thrives in captivity if well looked after. There are also a lot of beautiful morphs, like the stunning yellow banana ball python.

One enclosure accessory that is a must for a ball python is a good hide box — even a couple if the size of your enclosure allows it — because ball pythons are quite secretive creatures. You should also have a hot spot on one end of the enclosure and a cool spot on the other. 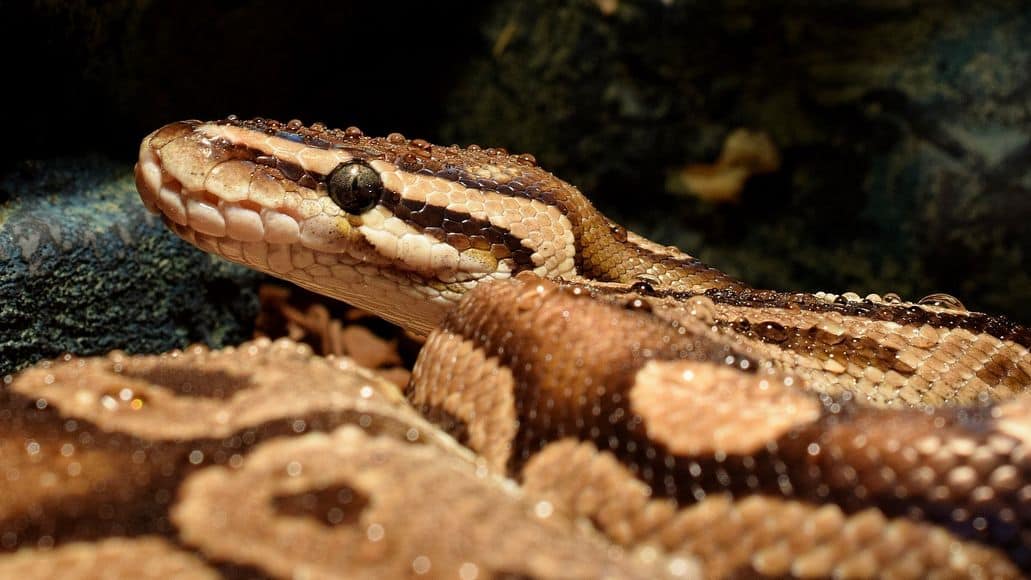 The ambient temperature in the enclosure should not fall below 75° Fahrenheit, and it is very important to have a thermometer with which to check these temperatures instead of winging it. Humidity should be between 50 and 60 percent. Not only does this keep your snake comfortable, it will also help it shed properly.

Ball pythons are normally fed an appropriately-sized rodent once a week, starting out with rat pups and moving up in size as they grow. Ball pythons can also eat thawed or pre-killed rodents, but you should not handle a ball python for a day after they have fed as this can lead to regurgitation. These pythons may also stop eating for certain times of the year (for instance winter), but there is usually no need for worry.

When you do handle your ball python, don’t make sudden movements and give it time to learn who you are. As they are mostly shy and spend a lot of their time hiding, they need to learn not to fear you.

You should be relaxed when holding your python so as to give it time to settle. It’s also best to avoid handling the snake when it is time to feed it. Excessive movement around the snake enclosure — by humans or pets — must be avoided. 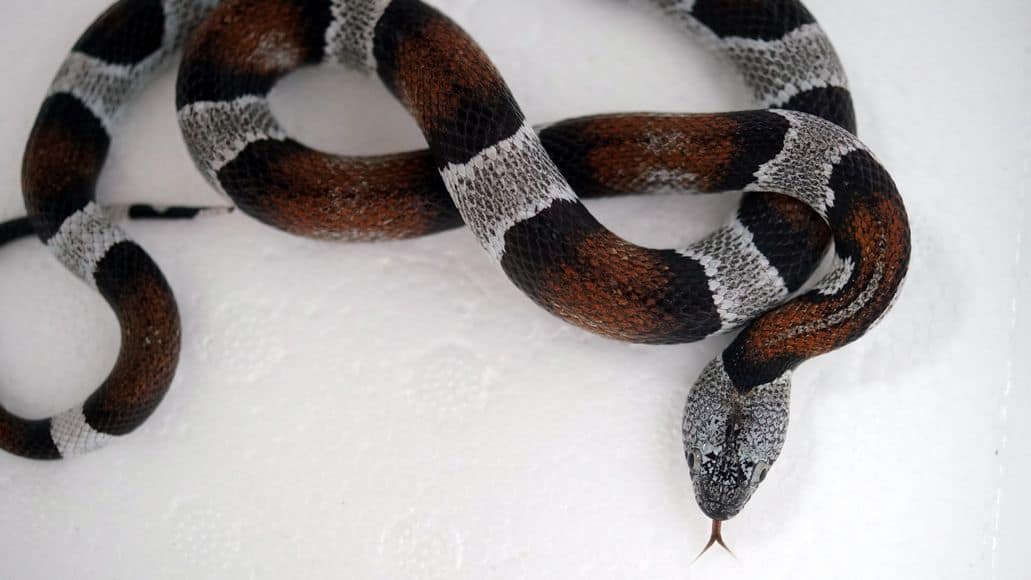 California kingsnakes (Lampropeltis getula californiae) are very popular as beginner snakes, although they have been described as “nippy”. In the wild it is an opportunistic feeder who will eat even other snakes, though only small ones averaging 3 to 4 inches length.

Your California kingsnake can be housed in a 20-gallon enclosure with a screened top, a hide, and suitable substrate. An under tank heater is necessary to help the snake thermoregulate, though no special lighting is required. Don’t use so-called “hot rocks” in the snake enclosure, because the centralized heat can cause burns.

Like with the ball python, the California kingsnake’s water bowl must be large enough for it to soak in. Remember to check that the snake enclosure is escape-proof, otherwise, they’ll definitely find a way out! 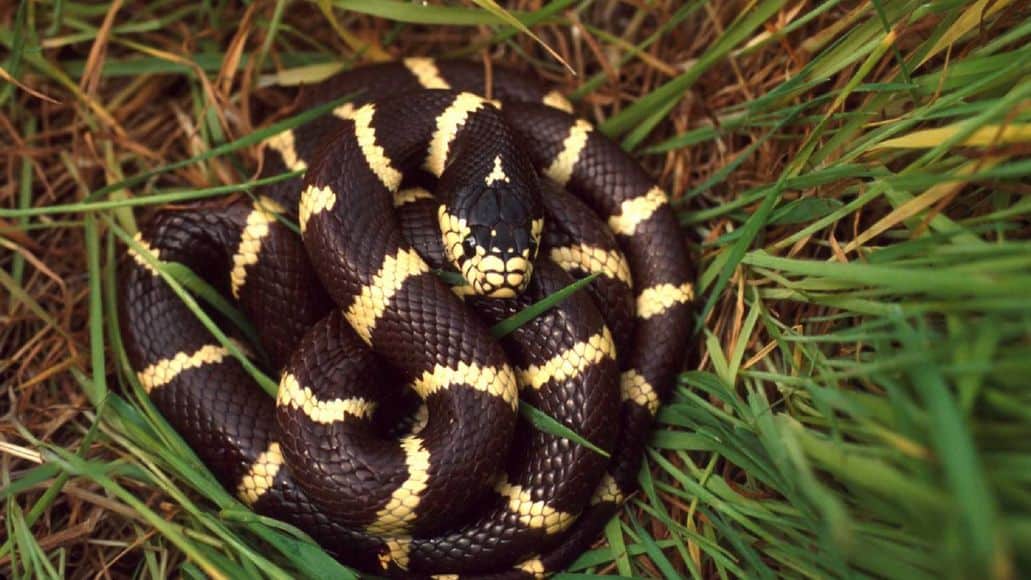 They should be adult-sized — more than 2 feet — before being introduced. Even then, always feed them separately.

The California kingsnake can still be quite wild by nature, even if bred in captivity. It may defecate or urinate on you when you pick it up because it is afraid, but with regular and gentle handling the snake should settle in and make a great pet. 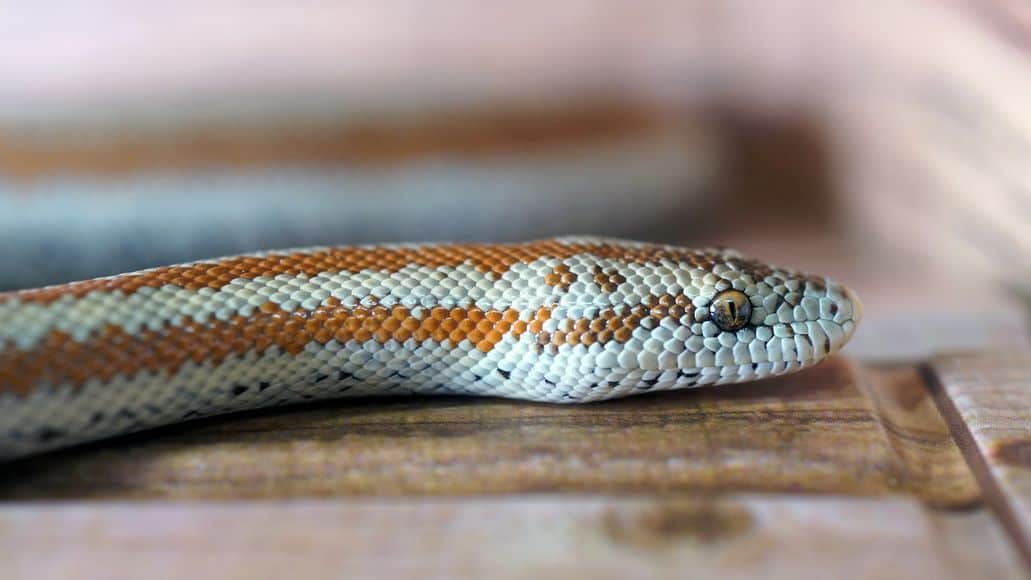 The Rosy Boa (Lichanura trivirgata) may not be as popular as the corn snake, but is still a great choice and among the top pet snakes for beginners, because it is fairly docile, tolerates handling well, and also doesn’t grow too large.

The average size of the rosy boa is 2 to 3 feet in length, although they can grow to 4 feet. Like ball pythons and corn snakes, the rosy boas come in a variety of color patterns and morphs.

Rosy boas, given proper care, also live a long time: up to live 30 years or more in captivity. Make sure you take the long lifespan into account when considering getting a rosy boa. 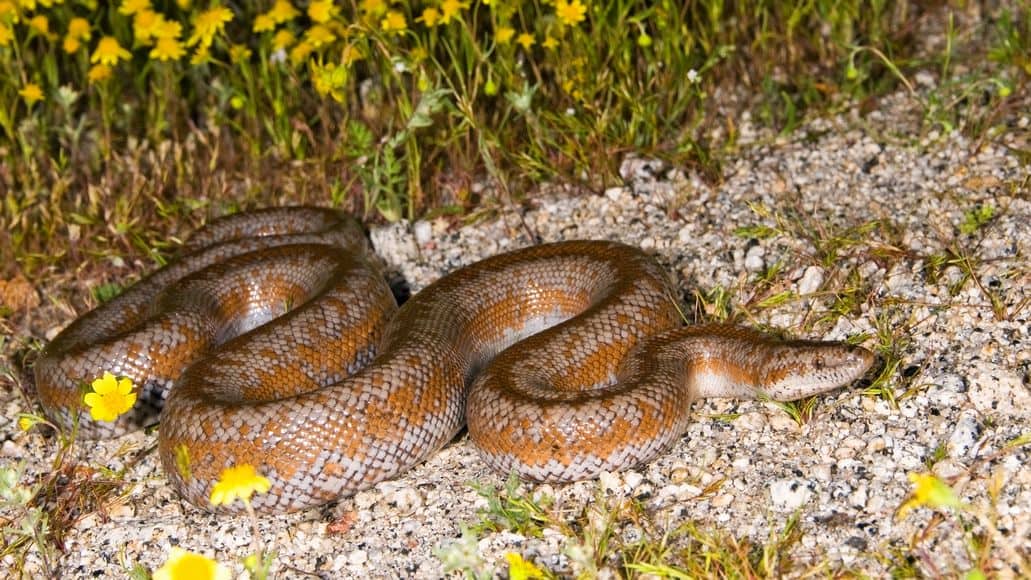 Thanks to their smaller size, rosy boas can live well in snake enclosures between 10 and 20 gallons, depending on their adult size. The enclosure must definitely be escape-proof and screen tops are not really recommended for rosy boas.

The enclosure should also not have an abrasive top. This could cause nostril abrasion, because rosy boas are notorious for rubbing their snouts against enclosure surfaces to find a way to escape.

Special lighting is not necessary for rosy boas, although a thermal gradient is important. The temperature gradient should be 65° (Fahrenheit) at one end and 90° at the other. Remember to measure the temperature with a reptile habitat thermometer. The enclosure can be cooled to 55° in winter and then slowly heated again once spring arrives.

For feeding, rosy boas usually live on domesticated mice, starting on fuzzy mice (i.e. younger than 7 days old) when they are hatchlings and eating small adult mice when fully grown. Rosy boas need only be fed every one to two weeks during summer, spring, and fall. 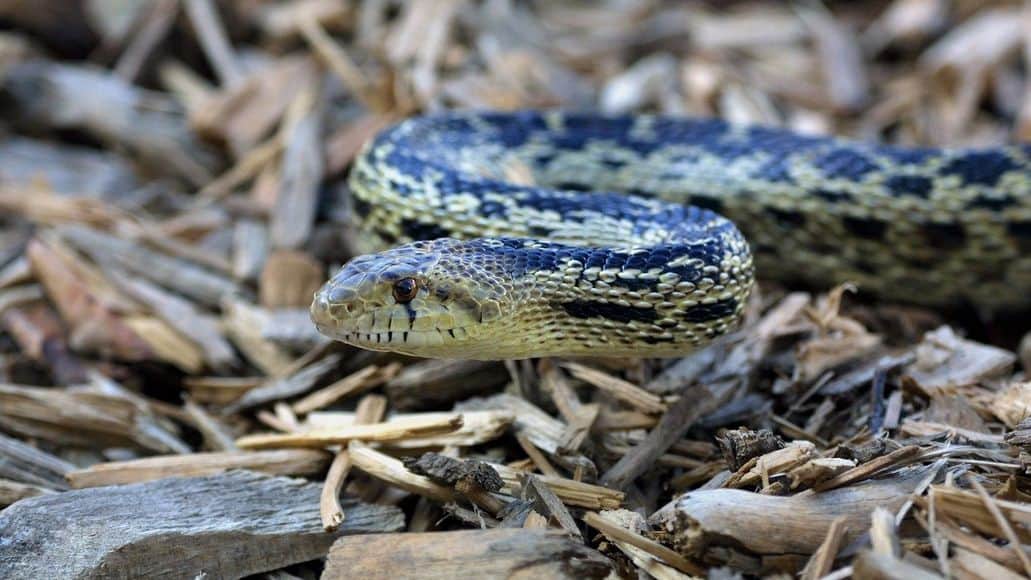 The Gopher Snake (Pituophis spp.) are also native to North America and are nonvenomous, ground-dwelling constrictors. They are hardy snakes and have minimal requirements when kept as a pet — which makes them one of the best pet snakes for beginners. They are bold and it’s their curiosity that makes them popular.

Gopher snake hatchlings are already a foot in length, with adults being between four and five feet generally, although some may grow to six feet. The enclosure for adult gopher snakes should be between 20 and 30 gallons, and ideally 40 gallons or more.

Larger snakes do best in enclosures that are at least four feet in length. Gopher snakes are very active and that is why they need a bit more space than other, similar-sized snakes. They are also quite the escape artist and need to have secure enclosures.

Like the other snakes on this list, the gopher snake doesn’t need any special lighting, but the amount of light they receive may affect their feeding and breeding responses.

You should use a heating pad to create a warmer area in the enclosure, ensuring that the snake can regulate its body temperature. Their water dish should be large enough for them to soak in. However, they do not require extra humidity in their enclosure. 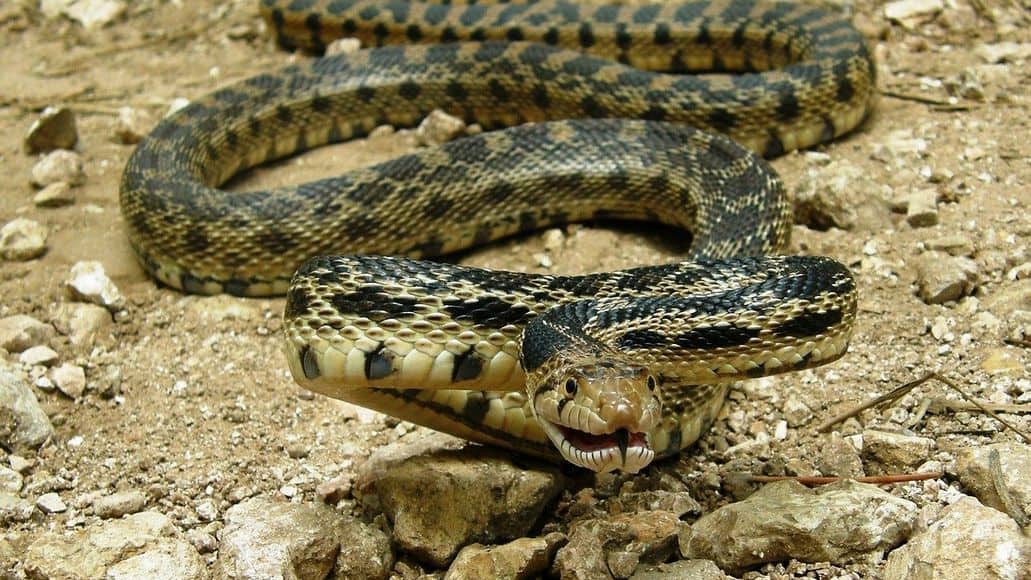 When feeding your gopher snake, you should be careful not to overfeed, as they have quite voracious appetites and will eat almost anything. Food should be offered only once a week.

Hatchlings will start with mice, but adult snakes will most likely feed on rats. As live rodents may injure the snake, freshly killed or well-thawed rodents are the best choice and most gophers do not hesitate to eat these.

Gopher snakes are active during the day and love to explore their enclosures. Most are docile and can be handled easily. If they do not like to be handled, they will let you know thanks to their epiglottal keel (a throat flap that vibrates upon exhalation).

They will also start to rattle their tail against the ground — hoping that you will mistake them for a rattlesnake. Regular handling, however, calms most snakes when given time. Gopher snakes learn to trust people over time and aren’t shy about exploring the world, making them one of the most engaging pet snakes!

Pet Snakes For Beginners: Tips For Buying Your First Snake

Do your homework and be specific about the species you want to get and why you choose that species. Make sure you have an adequate location for an appropriately-sized enclosure in your house. Finally, only buy your snake from reputable breeders — do not take snakes from the wild as pets!

Anaconda As A Pet: Complete Guide To Keeping An Anaconda104 Total Shares