You are here: Home / Snake Info / Rattlesnake Facts (8 Deadly Facts That Will Surprise You) 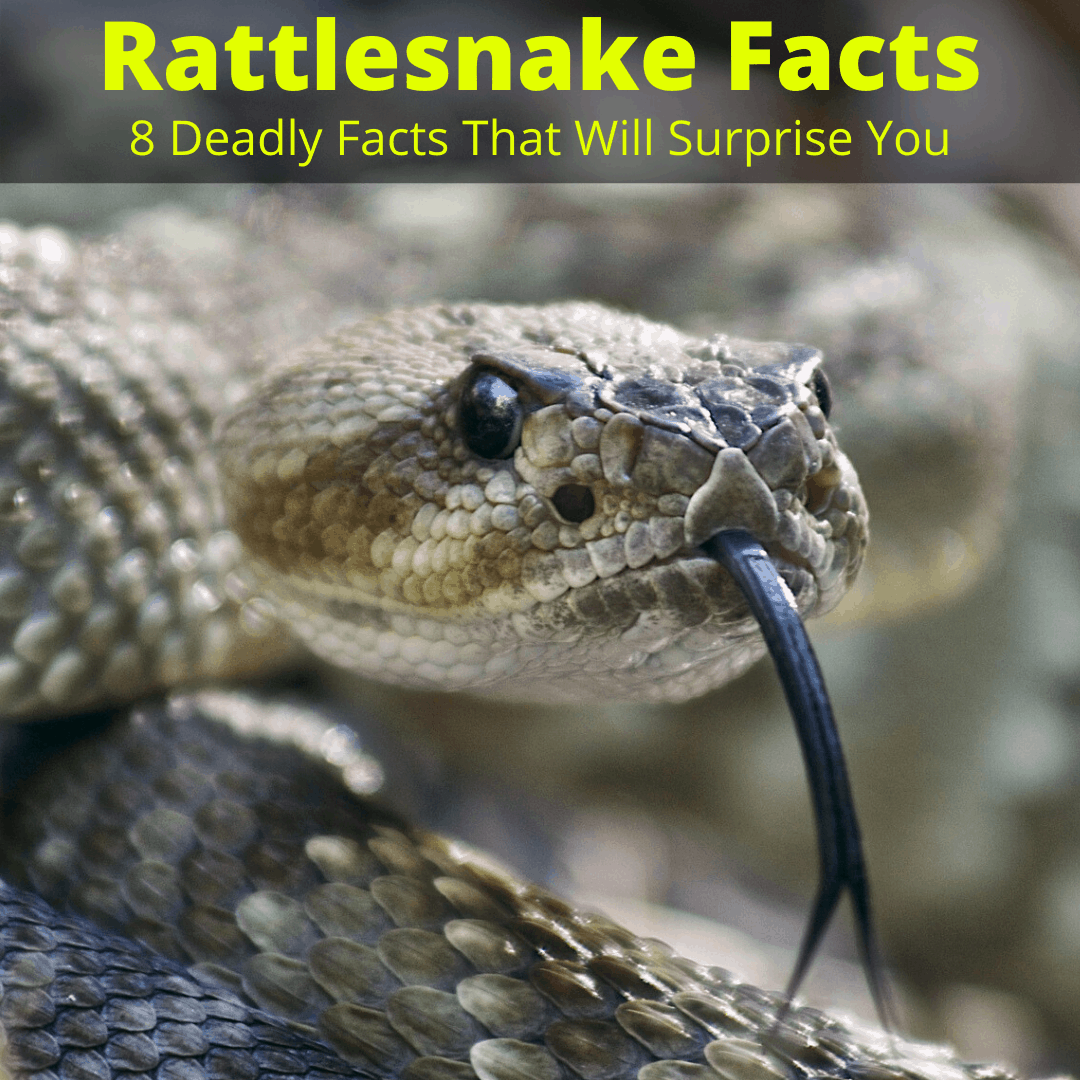 Rattlesnakes are not the monsters many believe them to be.

While they are venomous and they can kill us, they rarely do us any harm. They bear us no ill will and prefer to avoid us entirely.

They also play an important role in their ecosystems. Without them, the natural balance would be lost and the effects devastating.

Yet many are killed every year. Due to a lack of snake education, many see rattlers as a dangerous animal that needs to be eradicated for our safety.

But nothing could be further from the truth and that is why we have gathered 8 important rattlesnake facts, to help you better understand these magnificent creatures.

After you read this article, we hope that, if you ever do run into a rattler if the wild, you will know that there is nothing to fear and no reason to panic and you and the snake will just simply go your separate ways.

Rattlesnakes are found all over the Americas, from southern Canada to northern Argentina. We generally picture them living in the desert sands of the Southwest, but they also inhabit rocky hills, grasslands and scrub bush.

The US and Mexico account for most rattlers. There are 15 species in the United States and 25 in Mexico.

Most species are not endangered, but the ICUN Red List of Threatened Species does include some rattlers, sadly. One of these is the Santa Catalina Island rattlesnake, which has become endangered because of its limited range and because many are killed by feral cats and, of course, humans.

Now lets get to our list of interesting rattlesnake facts. 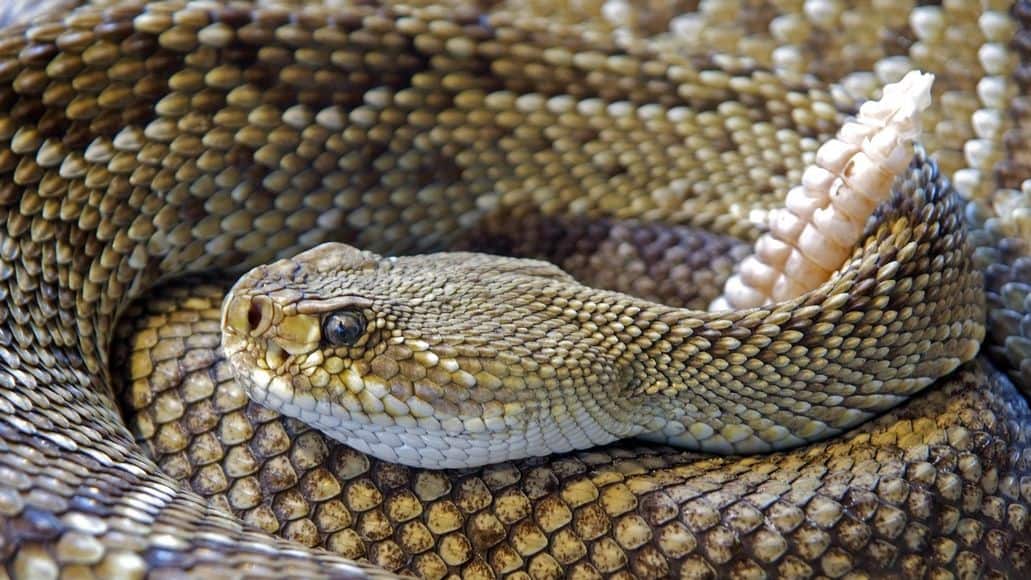 1. There Are 32 Species Of Rattlesnakes

There are some 32 known species of rattlesnake, along with many subspecies. This means many color variations. Some types of rattlers include the Western and Eastern Diamondback. The Eastern Diamondback is the largest venomous snake in North America, reaching up to 8 feet in length and having an eye-catching yellow-bordered black diamond pattern.

2. They Come In A Variety Of Colors

Each species is, in fact, identified by variations of the color patterns. Colors include shades of brown, black, gray, light pink, yellow shades, rust, and olive. The pattern can be diamond shaped or blotched, with some species not having any identifying pattern at all.

3. They Have A Triangular Head 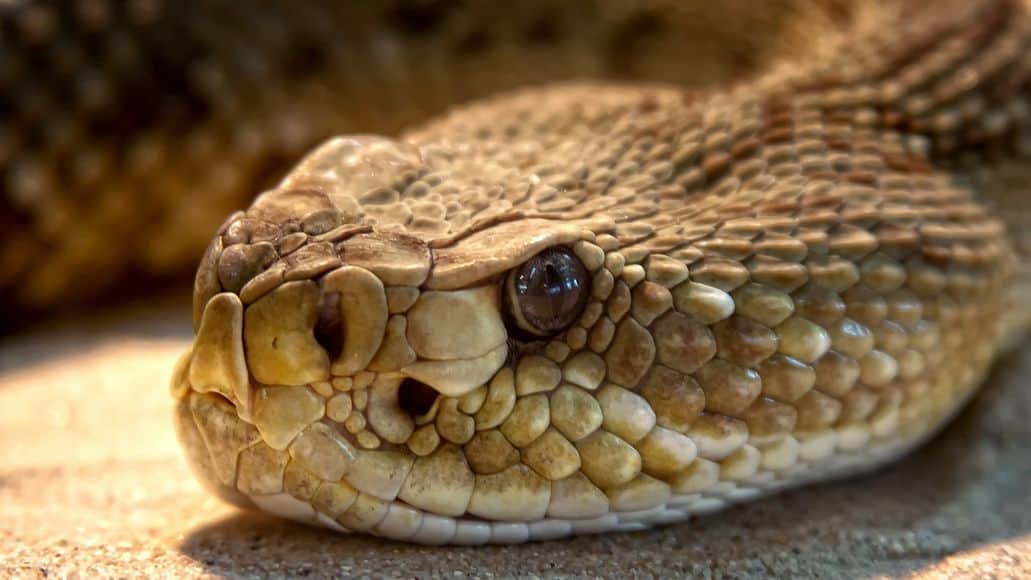 A distinctive physical characteristic with all rattlesnakes is their triangular head. The elliptical or vertical pupils are also distinctive and allow the snake to effectively hunt at night.

4. They Have Foldable Fangs

Rattlesnakes have large fangs in the mouth which fold out when the mouth opens.

There are certain characteristics that all rattlesnake subspecies have in common. They all have rattles, they are all venomous, and they are all a type of pit viper. As such, they all have two organs, or pits, under their nostrils, which are used to detect heat. 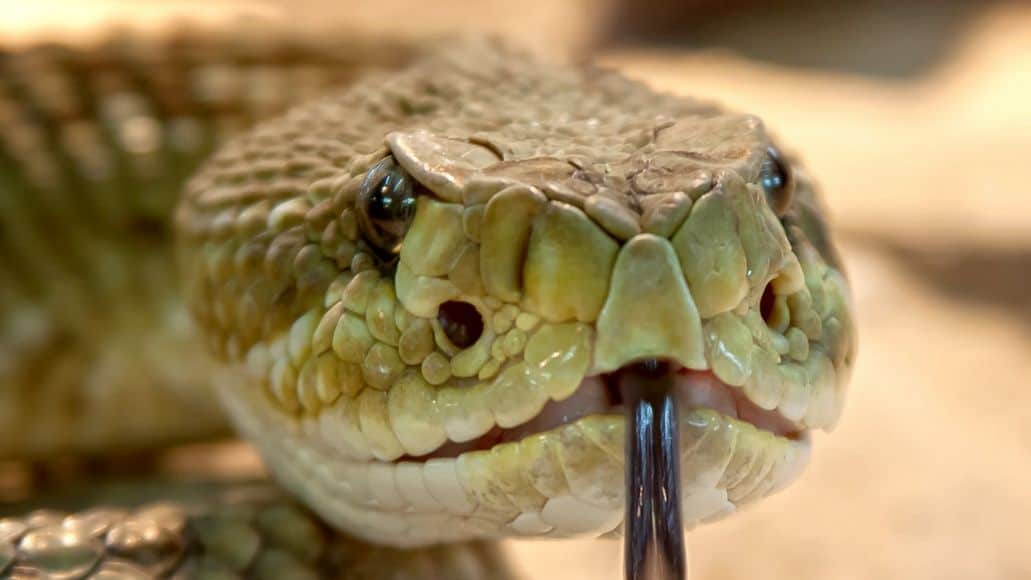 These organs sense body heat from animals and give the snake an idea of the animal they are about to attack. This allows the snakes to hunt their prey even in total darkness.

The lifespan of a rattlesnake can range up to 30 years in captivity. In the wild, it is closer to 15 years, due to illness, predation or injuries. The size of the rattlesnake varies between species. All are thick-bodied. In terms of length, they can reach 5 feet in ideal habitats, but generally, the average adult size is between 3 to 4 feet.

7. They Hibernate In Snake Dens

The rattler hibernates for the winter in a snake den. When temperatures start warming in April, it comes out of hibernation and starts to sun itself, before heading to its summer habitat.

8. Rattlesnakes Have A Jacobson’s organ

The tongue of the Rattlesnake is forked and it picks up microscopic airborne particles from the air. On slipping back into the mouth, the tongue touches a spot on the roof of the mouth known as the Jacobson’s organ or the vomeronasal organ. 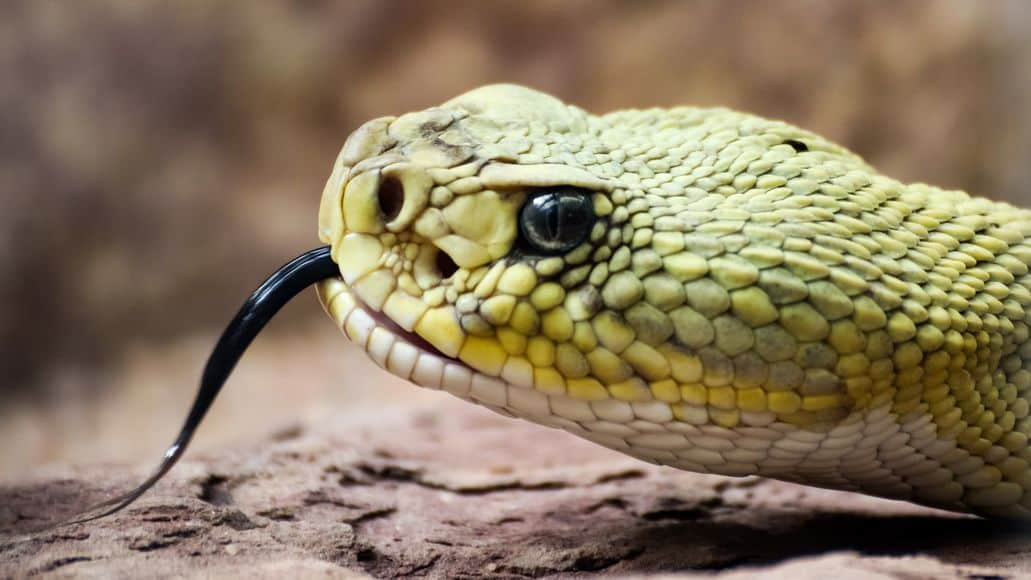 This organ analyzes the particles collected by the tongue and sends a message to the brain. This message provides information about whatever ‘thing’ the snake is currently interested in, letting it know if it is food, a mate or an enemy, for instance.

Keeping A Rattler As A Pet

Not many people want to keep such ‘danger’ in their homes and most do not want their neighbors to keep them either. For that reason, many states, like Arizona and Kansas for example, outlaw venomous snakes as pets. You’ll need to find out if your state allows you to keep one.

In states that do allow them, there are usually strict cage regulations and your venomous animal license has to be up to date. Please adhere to these regulations, since they are there to protect everyone.

And if it is illegal where you live, do not keep a rattler. If they are not allowed, it could mean that there is no antivenom bank. This means a deadly bite from your pet could end your life. Or the life of a family member or neighbor, in which case you will be held liable and go to prison for murder.

If you do opt to keep a Rattlesnake as a pet, you must make it a top priority to have an enclosure that is 100% secure. Even if it is legal to keep a rattler, think about it carefully and weigh the pros and cons.

It is a huge responsibility and you need to be completely prepared. Make sure to research everything there is to know about the snake, from its behavior patterns, to its preferred habitat, to how you should act in its presence.

The Rattlesnake Cycle Of Life 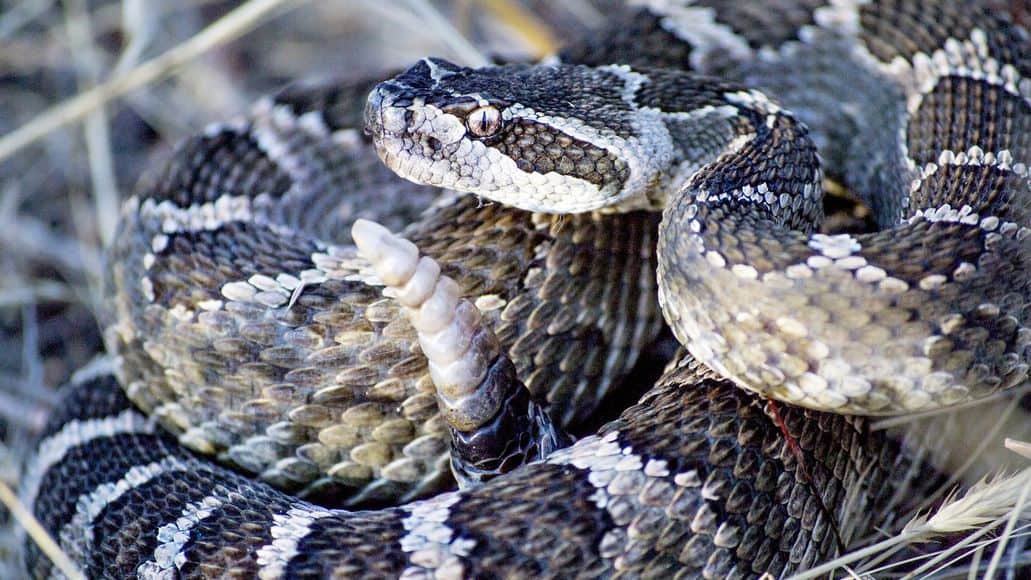 It takes about 3 years before a rattlesnake reaches sexual maturity. Mating usually occurs in spring but it’s not unusual for mating to take place in the fall as well.

The mating process can occur several times, and during this time the male is continuously flicking his tongue. The female can store the semen for months. This means she can wait several months after mating to fertilize the ova.

Rattler babies are born alive. The female carries the eggs inside her body for about 90 days after fertilization. She can carry anything from 4 to 25 eggs, but not all will make it out alive.

The ones that do survive are about 10 inches long when they emerge. They come equipped with short fangs and venom and are dangerous right from the time they make their first appearance. This kind of reproduction is known as ovoviviparous.

The female rattlesnake reproduces every 2 or 3 years. She doesn’t take one bit of interest in her young and quickly slithers off just as soon as they have been born.

The baby rattlesnakes don’t linger long in the area of their birth. They are about a week old when they shed their baby skin and also add their first rattle. Their top priority at this time is to search for food – that is if they don’t first become a meal for a hungry animal.

The young rattlesnake, if it can survive, will grow quickly. Every time the young snake comes out of hibernation, it sheds its skin and a new rattle section appears. 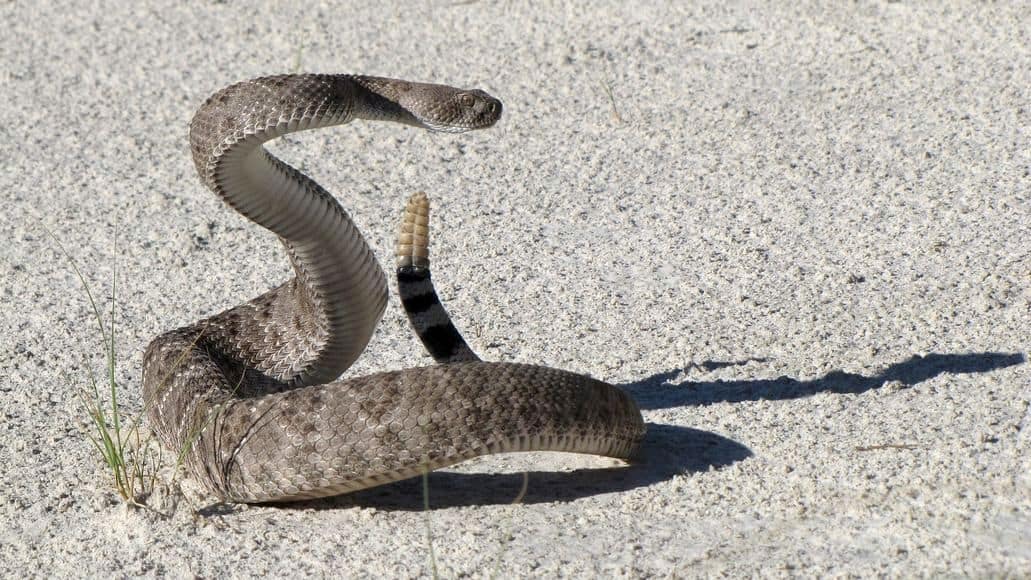 Rattlesnakes search out prey about every 2 weeks. They seek out small rodents, rabbits, lizards, and birds. They lie in wait and then strike at speeds of 1/2 of a second.

The rattlesnake’s venom paralyzes the prey and they swallow it whole. The digestive process can take several days, with the snake becoming lethargic and actually keeping out of sight for days at a time during the digestive period.

Yes, these snakes produce a strong hemotoxic venom, which they use for hunting and for defense against predators. If a rattlesnake bites you, it is considered a medical emergency. That said, although a bite can result in medical problems, it doesn’t necessarily spell death if you can get help immediately.

The venom is capable of damaging tissue, affecting the circulatory system and causing internal hemorrhaging. But most species’ toxin is nowhere near as powerful as the most venomous snakes in the world.

If you are unfortunate enough to be bitten by a rattlesnake, you’ll see puncture marks from the snake’s large fangs. At the bite site, you’ll usually experience burning and pain.

The venom takes just seconds to travel from the snake’s retractable fangs into the bloodstream. You will need medical help within 30 minutes of being bitten.

You’ll possibly start to feel lightheaded, have difficulty breathing, have blurred vision, and feel weak. The threat of these kinds of symptoms is what induces a paralyzing fear in many people at the mere sight of a rattler.

But if you’re out hiking and you come across one of these serpents, there is no need to panic. Just keep still and then slowly move away. Snakes are more scared of us than we are of them. If you leave it alone and show you are not a threat, it will leave you alone as well.

Development Of The Rattle 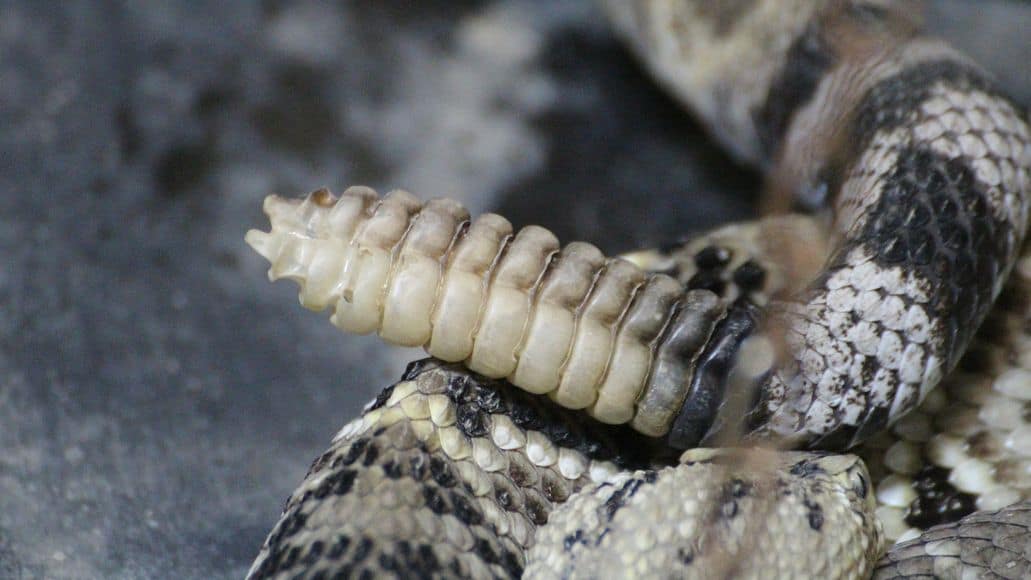 Rattlesnakes are known for, and identified by, their warning rattle, which comes from the rattles at the tip of their tails. A rattlesnake is born with a single rattler or a button. Every time these snakes molt, a new rattle section is added.

These buttons are made up of a material known as keratin. The noise from the rattle comes about because of each segment knocking together. This means that the rattlesnake has to have 2 or more pieces to have a rattle, so very young snakes are not able to produce any sound yet.

This hissing occurs when the rattlesnake forcefully expels air from within the throat. Snakes are deaf to airborne sounds, so this hiss isn’t a means of communication with other snakes, but simply a warning sign to anyone or anything that is not a snake.

Rattlesnakes are venomous snakes and not to be messed with. But they are also misunderstood snakes, filling people with fear instead of appreciating for everything the snake represents.

Most people lack knowledge of snakes and how to deal with them and are inclined to want to kill them. Humans should fear other humans far more than snakes – we are far more dangerous than any rattlesnake. They just want to be left in peace.

But the more we encroach on the snakes’ habitat, the more harmful interactions occur. The rattlesnake only strikes out when it feels threatened and most incidents come about when we accidentally stumble on one and cause it to see us as a threat.

As a result of these types of interactions, rattlesnakes are often killed. But that is a shame. They provide important ecological services and all they want to do is survive in a world quickly being overrun by humans.

Snakes in general haven’t had an easy time with human beings and we are, after all, the most dangerous and destructive living beings on the planet. Yet snakes are generally thought of as evil, sly and deadly and they’ve been persecuted and mercilessly killed by uneducated people as a result.

Snake education is critical for children. And hopefully World Snake Day can help. It falls on the 16th of July and seeks to draw the world’s attention to the importance of the snake’s role in the balance of nature.

World Snake Day is set aside for people the world over to get to know these reptiles better and on that day, we recognize the more than 3,000 different species of snakes living in almost all climatological regions of the world, and their importance to our entire planet.

Anaconda As A Pet: Complete Guide To Keeping An Anaconda105 Total Shares