What do you imagine when you think of snake teeth?

Probably the classic image of a snake stretching its jaw to reveal long, sharp, scary fangs.

All are venomous snakes and they need those fangs to inject venom into their prey.

Keep reading to learn all the most important snake teeth facts. We’ll also take a closer look at snake venom.

Different snake species will have different amounts of teeth, but all snakes need teeth in order to hunt and catch prey.

But almost all snakes probably have a lot more teeth than you thought!

Because snakes swallow their prey whole, they don’t use their teeth for chewing. Instead, their teeth have other uses, which we will cover below.

There are actually four types of snake teeth. If you had to categorize snakes according to their teeth, then they’d be put into these four categories:

Snakes that have opisthoglyphous, proteroglyphous, or solenoglyphous teeth are called advanced snakes. These all have venom in their fangs.

Let’s look at all these types in greater detail to see how their teeth work.

These snakes have what’s called aglyphous teeth (otherwise known as normal teeth) and they have been given this name because they aren’t grooved, and they do not have hollow tubes.

Snakes that have these teeth didn’t evolve to have fangs or they only have one maxilla that didn’t evolve. Basically, they lack the venom gland you’ll find in poisonous snakes.

Some snakes with normal teeth developed opisthoglyphous teeth but lost them, so they have a venom gland that lacks venom.

Finally, there are species of snakes with normal teeth that can use toxins taken from their prey to use as self-defense. They tend to have large teeth at the front of their mouths that don’t have grooves or hollow tubes.

These snakes have fangs, but they are harmless. Their venom is not powerful enough to cause problems and the venom gland can’t inject the venom into the snake’s prey properly.

These teeth are grooved. They are located in the front of the snake’s mouth. These fangs are smaller than the solenoglyphous fangs, because they can’t move. Snakes that have these teeth will attack their prey until the prey dies or can’t escape.

These teeth are hollow and highly sophisticated. They inject venom into the prey with a lot of pressure. An example of a snake that has these teeth is the viper. It has two sets of fangs and, incredibly, sheds its fangs every two months.

How Powerful Is A Snake Bite?

Even when they’re not filled with venom, most snake bites hurt and cause discomfort.

This can take the form of swelling and other symptoms that affect the body in various ways, like headaches and numbness.

In some people, snake bites cause severe allergic reactions that can be fatal.

When it comes to venomous snake bites, there are three types of venom: cytotoxins, neurotoxins, and hemotoxins.

This type of venom harms the body’s cells. It contains digestive enzymes and molecules called spreading factors that can result in both local injury (e.g. swelling and bleeding) and systemic injury, like organ damage.

Neurotoxins are the deadliest type of venom and destroy nerves in the body, which can result in paralysis and death.

This type of venom destroys red blood cells in the body. Rattlesnakes and Copperheads are common hemotoxic reptiles.

The venom that’s involved is called metalloproteinase. This breaks down the membranes of red blood cells. If enough cells break down in response to the venom, the body ends up hemorrhaging.

We’ve discussed the different types of venom, but what is venom, exactly?

Venom is basically a blend of proteins and enzymes. We tend to think of venom as being the same thing as poison, but this is not exactly the case. Let’s look at some of the differences between venom and poison. 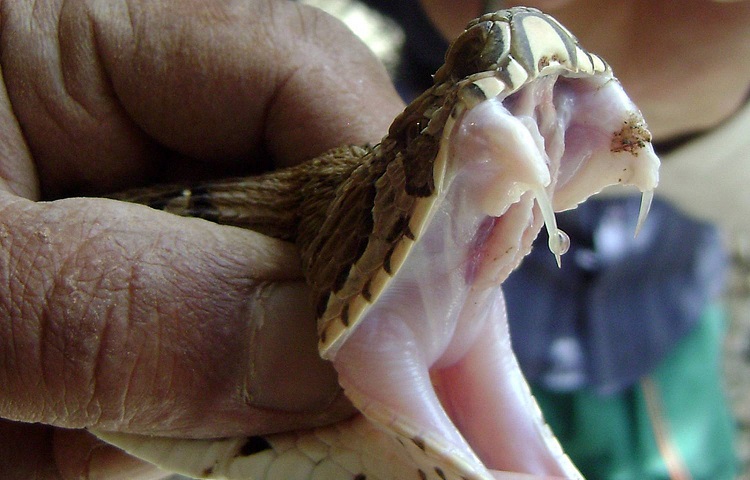 Venom is produced in the salivary glands of snakes, which are located in their heads.

Snake fangs work like hypodermic needles. When a snake bites its prey, or you, muscles inside the snake’s head contract to squeeze the venom glands.

This pushes the liquid venom through the fangs and into the flesh.

Some snakes, like large rattlesnakes, have a large amount of venom in their fangs. But they have control over how much venom they inject into their prey and they don’t always use the full amount.

Even smaller snakes with less available venom can control how much they release. So, if you’ve heard that snakes can choose how much venom they release, now you know it’s not a myth!

How Snakes Get Their Teeth

It’s a fascinating question: “How do snakes develop their teeth and fangs?” A study in Nature set out to explore this question.

Researchers looked at a variety of snakes and discovered that both the front and back fangs in snakes develop from teeth-forming tissue that’s located at the back of the upper jaw.

In front-fanged snakes, these front teeth displace forward when the embryos grow, as a result of fast growth of the embryonic upper jaws. By comparison, back or rear fangs remain in place after they are formed.

Can snake venom be used in a good way?

Venom has toxins that can be beneficial for human medicine. Scientists have found that some snake venom can affect blood clotting and blood pressure.

Furthermore, proteins in snake venom have been used to treat health conditions like Parkinson’s disease, strokes, and cancer.

Do all snakes have the same amount of venom?

The amount of venom varies. A good example in the Inland Taipan (Oxyuranus microlepidotus). It lives in Australia and has the most dangerous venom of any snake in the world.

This snake has a maximum venom yield of 110 mg in one bite, which is enough to kill more than 100 people. By comparison, the Gaboon Viper can inject up to 2400 mg in one bite, but its venom is much less potent.

Snakes have different types and numbers of teeth depending on their species. Some of these teeth are fangs that can release venom into the flesh of their prey.

But even when no venom is present, snake bites can still be harmful and very painful. In addition to the most important facts about snake teeth and bites, we’ve also gone deeper into the different types of teeth and the venom some of them can deliver.